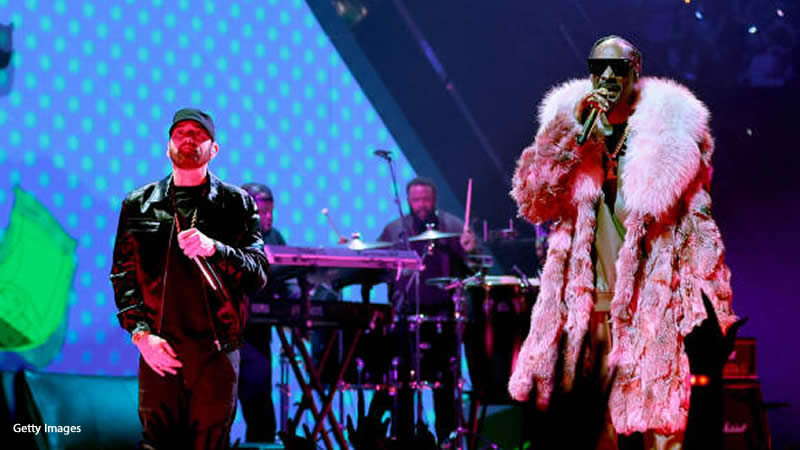 Eminem has revealed that a feud he had with Snoop Dogg was settled after their mutual friend Dr. Dre was hospitalized.

The announcement was made during an appearance on Paul Pod, a SiriusXM show hosted by Paul Rosenberg, Eminem’s longtime manager who has appeared on several albums throughout the rapper’s discography.

“I think that there was a miscommunication at the time in regards to him being on my album,” Eminem said. “I think he had wanted to do something with me [in return for appearing on Eminem’s album], and maybe gave you [Rosenberg] the idea… you said something to the effect of, ‘Well, let’s hear what the song is first,’ and he said the way that he took it was… that I don’t fuck with him.”

Rosenberg then responded to this, saying he didn’t “remember exactly the circumstances” surrounding his conversation with Snoop or his team. He did clarify, however, that the idea that Eminem was not a fan of Snoop’s “was obviously not the case”.

Following Dr. Dre’s aneurysm that left him close to death for several days, however, the rappers reached out to one another. “When that thing happened with Dre, we were like, ‘Bro, this is stupid,’” Eminem said. “This is stupid as hell to be feuding right now.”

Eminem and Snoop Dogg have made several public appearances together since rekindling their friendship. Both performed during the Super Bowl half-time show in February, alongside Dr. Dre, Mary J. Blige, 50 Cent, and Kendrick Lamar.

The duo also released a collaborative single, ‘From The D 2 The LBC,’ which they performed at the VMAs last —————————–month. Both were recently spotted in the studio together, with Dr. Dre once again at the helm.