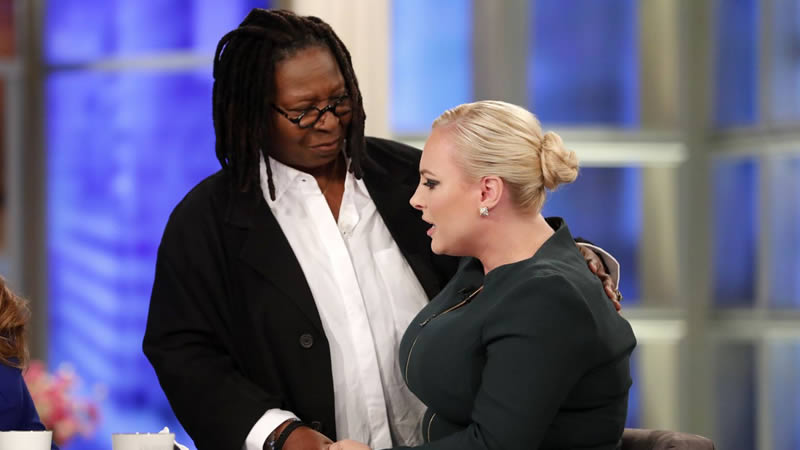 Whoopi Goldberg appeared indifferent as she listened to Meghan McCain rave about the Duchess of Sussex.
To a rant about Meghan Markle, Whoopi Goldberg had a simple one-word reaction.

In March of this year, the Sister Act singer and Meghan McCain were discussing the Duke and Duchess of Sussex’s troubles with the Royal Family.

Following their explosive interview with Oprah Winfrey, there was a lot of talk about Meghan Markle and her husband, Prince Harry.

Meghan said during a chat on The View: “Monarchies are stupid, the American experiment is the way to go.

“And if we have two American women, Meghan Markle and Oprah Winfrey, who have single-handedly finished what George Washington and our revolutionary counterparts did, I’m all for it.”

After a few seconds of silence, Whoopi seemed to have had enough of Meghan’s outburst about the Duchess and the American revolution and responded with a simple: “Okay.”

Whoopi was irritated and furrowed her brows before responding.

Meghan, 37, started the conversation by bringing up Piers Morgan, who was seen exiting the set in a dramatic manner.
When the famed interview was released nine months ago, it went viral almost immediately.

After the video went viral, TV host Meghan even tweeted, “bums me out.”

“It’s 2021 and we are all Whoopi,” comedian Justin Martindale tweeted in reaction to Whoopi’s statement.
During her interview with Oprah, the Duchess of Sussex made some stunning accusations.

She told the host that she had felt suicidal during her stay with the royal family, prompting Piers to go on a rant.
During a broadcast on Good Morning Britain, Piers stated he didn’t believe the Suits actress’ assertions about her mental health.

Ofcom got 54,000 complaints in response to his statements, the highest amount of the year.

Meghan stated that an anonymous member of the Royal Family was concerned about the color of her baby Archie’s skin in one jaw-dropping moment.

As per Mirror, she said when she was pregnant with Archie there were “concerns and conversations about how dark his skin might be when he’s born”.

Meghan said: “In those months when I was pregnant, we had in tandem the conversations of him not being given security or a title, and also concerns about how dark his skin might be when he’s born.

“They didn’t want him to be a prince or princess, not knowing what the gender would be, which would be different from protocol and that he wasn’t going to receive security“.