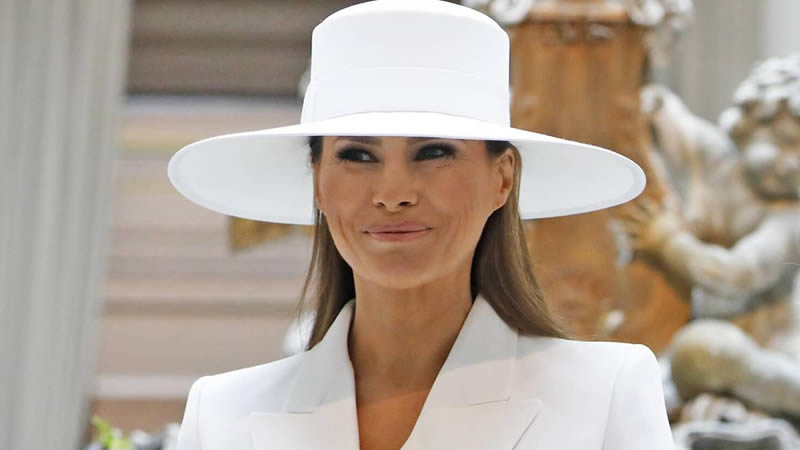 Melania Trump started off 2022 by announcing she’d be auctioning off a hat, as well as two other items, for a low, low starting bid of $250,000.

Melania Trump’s website, MelaniaTrump.com, only accepted cryptocurrency bids. Keep this in mind. This will be important.

The auction was called the “Head of State” collection. It included an autographed custom-made, wide-brimmed white hat she wore to meet French President Emmanuel Macron and his wife, Brigitte, during the Trumps’ first state visit to the White House in April 2018, as well as a watercolor of Trump wearing a hat and a non-fungible token, or NFT, depicting the image.

One year after leaving the White House, Melania Trump is remaking herself as an entrepreneur. In a departure from previous first ladies, but consistent with her business trajectory even before her husband’s election, when she licensed her name to jewelry and skincare lines, she is reviving her personal brand for monetary gain.

The massive cryptocurrency crash, however, has an unexpected gum in the works.

“A portion of the proceeds derived from this auction will provide foster care children with access to computer science and technology education,” read a small disclosure on the auction’s website. The rest, presumably, will go to Trump herself. Trump’s office did not respond to questions about how much of the proceeds will be donated, and to which charity.

The starting bid had dropped to $155,916 and continued to fluctuate around that level when The Washington Post checked the hat auction exactly two days before its indeterminate ending time (advertised as Tuesday at 11:59 p.m. PST, although a countdown clock on the website ran 24 hours faster than that). Bids had previously reached more than $275,000 during the 14-day auction.

However, the auction only accepted bids in cryptocurrency, which has nosedived in the last week, with bitcoin falling 20% and Ethereum falling 30%.

Melania Trump’s hat auction may have become unexpected collateral damage in the crisis, a prime example of what happens when reckless risk-taking clashes with bad timing. Solana (SOL), the only cryptocurrency accepted on Trump’s website, has been one of the hardest hits, falling more than 40% in the previous week. The Solana blockchain (a distributed database that stores a secure and decentralized record of digital transactions) also experienced outages on Friday and Saturday, adding to the problem. If this auction had taken place in December 2021, Trump would have been accepting bids on Solana at a time when its value had increased 11,150% since the beginning of the year.

Instead, in an unexpected turn of events – or perhaps a series of technical glitches – Trump’s auction appeared to close early Tuesday morning (a day earlier than advertised on the website), with the hat and its lot selling for $160,218, or approximately $90,000 less than the asking price. The site read “Auction Ended” for five hours before bidding reopened the next time The Post checked. The highest bid is still 1,800 SOL, as it has been for days, but with a value of $177,750 as of 2:15 a.m. Eastern time.

All of this is happening at a time when the Trump family’s business practices are being scrutinized, including by New York Attorney General Letitia James, a Democrat who has filed evidence in a civil investigation against former President Trump and his three eldest children, focusing on the ways he allegedly misrepresented his assets to secure favorable loans and insurance policies.

Experts on modern first ladies have been puzzled by the former first lady’s post-White House activities.

“Most previous first ladies certainly have used their celebrity to do good works,” says Myra Gutin, author of “The President’s Partner: The First Lady in the Twentieth Century,” citing Laura Bush’s post-White House advocating for Afghan women; Michelle Obama’s work supporting girls and education and fighting for voting rights; Rosalynn Carter’s continued hands-on volunteering for Habitat for Humanity; and Betty Ford’s rehab center and work to de-stigmatize addiction. “I would classify it [the auction] as a personal pursuit, versus one that’s likely to benefit the country,” says Gutin.

Selling significant items of clothing worn by the first lady defies tradition as well. Although they are not required to do so, first ladies typically donate iconic items to the Smithsonian’s First Ladies collection or to their husband’s libraries and museums in order to preserve history for the public.

Hervé Pierre, the French-born, New York-based designer who became her White House stylist after designing her inaugural gown, made the hat for the occasion. (That one is housed in the Smithsonian.)

“Mrs. Trump recognized this important moment for the country, and accordingly, a great deal of consideration went into the planning,” her website reads, explaining why she chose to auction off the hat.

“I’m not surprised when I see controversies surrounding her public activity,” says Lauren Wright, a political scientist who studies first ladies at Princeton University. “I never know, as I never knew when she was in office, whether she has advisers telling her, ‘You know, we might want to clarify how much of this is going to charity and how much is not.’ Or if she’s doing things and she just doesn’t think a lot about potential public backlash.”

Certainly, other first ladies and presidents have engaged in for-profit activities, particularly the large advances many of them receive for writing memoirs and speaking engagements. “But that doesn’t take up nearly as much time as their not-for-profit activities,” Wright says. “That’s most of what they spend time on when they leave office.”

Melania Trump, of course, has always been an outspoken first lady. Gutin claims she was “relatively inactive” in public and rarely spoke with the press. She also refused to campaign for Republican candidates, including her husband, despite polls showing her as the most popular member of the Trump family. (However, she left office as the least popular first lady in history, with a CNN/SSRS poll showing her with a 42% favorable to a 47% unfavorable rating.)
According to People and CNN, she now mainly spends time at Mar-a-Lago with her sister, parents, and 15-year-old son, Barron, and has a routine of lunch, dinner with her husband, facials, manicures, and massages, often spending several hours a day at the spa or going twice in a single day.

“She seems to be reverting back to more of the life that she enjoyed when she was not the first lady when she was living in New York,” says Gutin. In New York, Gutin adds, she was “a consumer, and she’s always been someone who was very au courant with fashion and cultural trends.”

Trump appeared to be content to remain out of the public eye for most of the year. Her Instagram begins with her White House farewell speech and continues with compilation videos of her meeting children, thanks for birthday wishes, and holiday greetings. On the one-year anniversary of Trump’s controversial renovation, she came out swinging when a historian, Michael Beschloss, tweeted a barren photograph of the Rose Garden and called it an “evisceration,”
“@BeschlossDC has proven his ignorance by showing a picture of the Rose Garden in its infancy,” Trump tweeted.

The most common critiques of the renovation had been that Trump took out the garden’s famous crabapple trees – many of which horticulture experts say were diseased or preventing sunlight from reaching the roses. The barren look of many early photos of the renovations are, experts say, because the flower bushes, were newly planted and not even close to full bloom. “The Rose Garden is graced with a healthy & colorful blossoming of roses,” her Tweet continued. “His misleading information is dishonorable & he should never be trusted as a professional historian.”

In many ways, it seems that Trump was always looking for ways to capitalize on branding opportunities. Trump filed lawsuits in the United States and the United Kingdom against the Daily Mail in February 2017, while she was still living in New York City before moving to the White House, for insinuating that she had worked as an escort. According to the Associated Press, the cases were settled for a total of $2.9 million.

Notably, the filing claimed that the tabloid’s insinuations had cost Trump “the unique, once-in-a-lifetime opportunity . . . to launch a broad-based commercial brand in multiple product categories, each of which could have garnered multi-million dollar business relationships for a multiyear term during which Plaintiff is one of the most photographed women in the world.” The lawsuit stated that Trump had the potential to launch product lines in, “among other things, apparel, accessories, shoes, jewelry, cosmetics, haircare, skincare and fragrance,” to capitalize on being the first lady – but had been thwarted by the damage caused to her reputation.

The ethics of profiting from the first lady’s office when she has left it are murky.

The hat auction marks only the second initiative Trump has undertaken in the past year. The first was the sale in mid-December of an NFT with a watercolor painting of her eyes called “Melania’s Vision,” by French artist Marc-Antoine Coulon, who also painted the hat NFT. Unlimited quantities of that NFT were sold for one SOL, which was roughly $185 Each came with an audio message from Trump: “My vision is: Look forward with inspiration, strength, and courage.”

Melania Trump is far from the only celebrity who is enamored with NFTs and cryptocurrency. Shawn Mendes, Eminem, and Grimes all made millions of dollars by selling NFTs of their images (only for the value to drop precipitously months later). Matt Damon has been featured in a crypto commercial and Reese Witherspoon recently tweeted about crypto is the future, both to widespread ridicule.

It is the uniqueness of NFTs, being digitally marked, authenticated, and non-replicable, that seems to appeal to Trump, who used the phrase “one-of-a-kind” many times in advertising the hat, watercolor, and NFT.

You’d think Melania Trump was an NFT spokeswoman based on her Twitter feed. Since launching “Melania’s Vision” on December 16, she has tweeted 24 times about her NFT sales, only pausing to send out Christmas greetings or praise the Coast Guard. A news release at the time stated, “Mrs. Trump will release NFTs in regular intervals.”

One page of her website is a 22-part FAQ answering such questions as “What is an NFT?”; “How do I create a crypto wallet?”, and “Why to buy an NFT?” Answer: Because it’s “a unique and secure digital asset” and, like the other collectibles, such as coins or baseball cards, it has the potential to increase in value and can be sold or traded, according to the website.

In comparison, her former White House initiative, Be Best, has two paragraphs and a video on its page. Trump has stated that she intends to continue Be Best, which focuses on issues affecting children such as cyberbullying, drug abuse, and mental health.

Trump announced in a tweet on Monday that she would be honored at a gala for her Be Best initiative Fostering the Future, which “provides foster care children with access to education in computer science,”
Her website contained no information about the Fostering the Future initiative, and this appears to be the first time she has mentioned it.