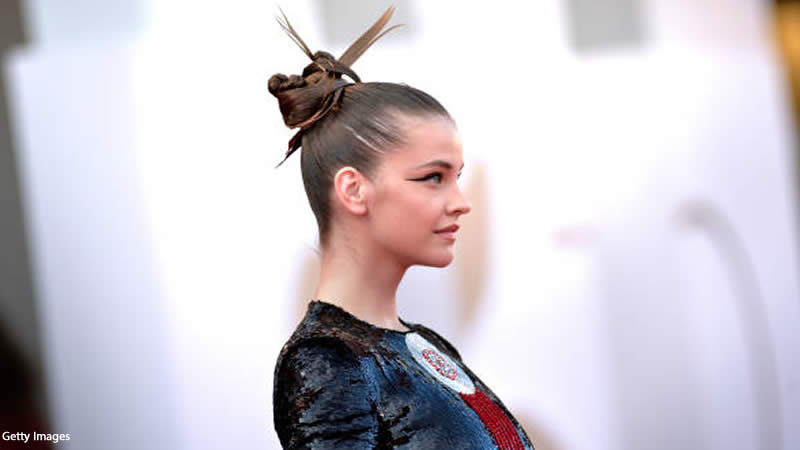 At the 79th Venice International Film Festival, Barbara Palvin and Dylan Sprouse were not afraid of a PDA moment.

During the 79th edition of the star-studded event, the 28-year-old model and her long-term actor boyfriend attended the red carpet premiere of White Noise and the Opening Ceremony.

According to Dailymail, the former Victoria’s Secret Angel wore a cap sleeve black sequin Armani Privé Gown in a bold and experimental look.

The gown is from the label’s spring 2019 couture collection and has a stunning silver and red pendant design on the nape.

Given that Barbara is an Armani Beauty ambassador, it’s not surprising that she chose the Italian designer. Marc Eram, who has previously worked with Dove Cameron and Sabrina Carpenter, styled the Hungarian beauty.

The model’s beauty look included a structural bun created by hairstylist Owen Gould and a graphic winged liner, which added to the avant-garde red carpet look.

The duo attended the premiere of White Noise with the film’s star-studded cast, which included Adam Driver, Greta Gerwig, and Jodie Turner-Smith.

The film, which will be available on Netflix in December, is a dark comedy directed by Noah Baumbach and adapted from Don DeLillo’s 1985 novel of the same name.

Who is Barbara Palvin?

Barbara Palvin was born on October 8, 1993. She was born in Hungary and raised in Budapest. A model scout discovered her while walking with her mother in her hometown when she was 13 years old.

She became famous after appearing in the Sports Illustrated Swimsuit Issue in 2016. She became a Victoria’s Secret Angel in 2019, joining fellow supermodels Alessandra Ambrosio and Adriana Lima. She is now an Armani Beauty ambassador.

How long have Barbara Palvin and Dylan Sprouse been dating?

Barbara Palvin and Dylan Sprouse have been in a relationship since 2018. They lived together in New York until 2021, and have since moved to Los Angeles together.