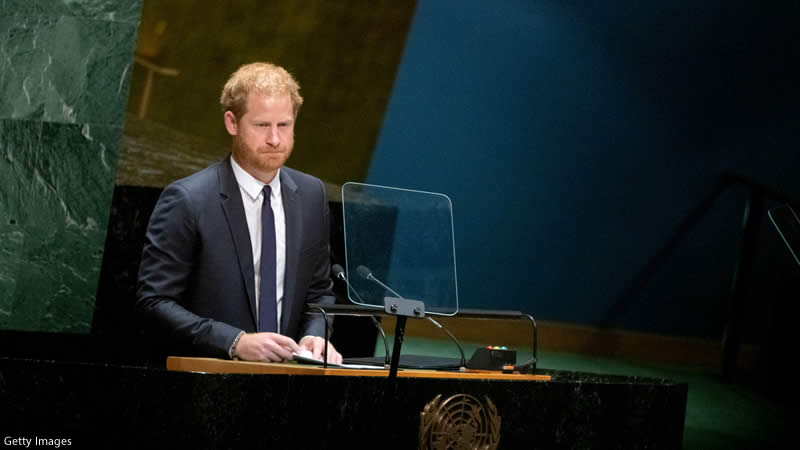 The Duke of Sussex warned of a “global assault on democracy and freedom” in a speech earlier this month to mark Nelson Mandela International Day at the UN General Assembly in New York. Harry, who has given up his royal duties and now resides in California with Meghan Markle, was criticized by royal analyst Kristen Meinzer for being “not at all subtle” in his remarks.

Ms. Meinzer told Newsweek‘s The Royal Report podcast: “We all know that royals are not supposed to wade into politics, even though just last week on this show we were speaking about how William has been doing that lately.

“But Harry is doing it and not subtly at all. This is very overt about what he is talking about.

“He is criticizing the US, what the government has been doing – pulling back rights on the people.

“That is not subtle at all. That is outright criticism of the US government.”

Jack Royston, the royal correspondent for Newsweek, backed the Duke for his remarks.

Mr. Royston said: “I don’t think he ever would have done this if he was a working member of the Royal Family.

“However, he is out now and so really the royal convention of him not engaging fully in politics doesn’t really apply to Meghan and Harry anymore.

“They have every right to go and say whatever they like about political issues.

“Here he has taken on a ruling by the US Supreme Court so this is about as controversial as it gets and he’s done it at the United Nations.“

In his lecture, Harry raised the risks of the Ukrainian conflict, the coronavirus pandemic, “weaponizing lies and disinformation,” and US abortion laws.

“We’re living through a pandemic that continues to ravage communities in every corner of the globe; climate change wreaking havoc on our planet, with the most vulnerable suffering most of all; the few, weaponizing lies and disinformation at the expense of the many; and from the horrific war in Ukraine to the rolling back of constitutional rights here in the United States.

“We are witnessing a global assault on democracy and freedom – the cause of Mandela’s life.”

According to Express, Harry brought his wife Meghan along for the event. The couple arrived at the UN building holding hands on July 18.

They ignored a query from a US reporter regarding Tom Bower’s controversial new royal book.

The Sussexes moved to Montecito after ceasing to be working royals in March 2020, at which point they started living there.

After urging people to take part in American politics by voting in the 2020 presidential election, Harry and Meghan have already come under fire for allegedly intervening.

The US Supreme Court’s decision to reverse the landmark Roe v. Wade decision, which ended constitutional safeguards for abortion, was condemned by the Duchess last month.