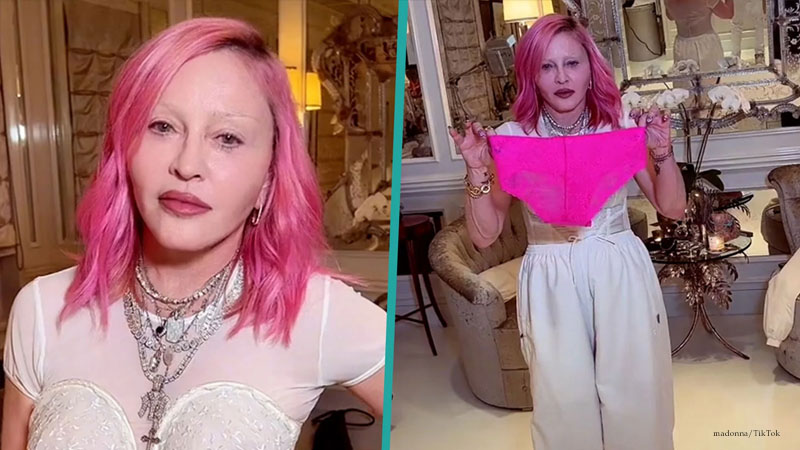 In a new TikTok video, Madonna allegedly comes out as gay. The news comes just weeks after she was caught on video kissing a female Dominican rapper during New York Fashion Week in September.

The Queen of Pop is shown in the video throwing a fuchsia pink undie at a trash can, with the words “If I miss, I’m Gay!” flashing across the screen. Madonna is seen in the video failing to sink the panty into the open bin, raising one hand in acceptance, and walking away with her other hand on her hip.

The 64-year-old singer, who has 2.8 million Instagram followers, did not caption the post. However, it drew lots of comments from TikTok users who took the video as her subtle way of revealing her sexuality.

“Did Madonna just come out? And I’m witnessing it in real time?” one user wrote. “What in the 80s is happening,” another wrote.

Meanwhile, another user said the video should come as no surprise as she’s been out for so long. “Madonna has been an out bisexual for literally decades, dudes,” the user noted.

Several previous incidents involving the pop singer suggested that she might be interested in women. Madonna has made headlines for locking lips with female celebrities such as Nicki Minaj, Britney Spears, and Christina Aguilera throughout her career.

Her performance at the 2003 VMAs was memorable, as she surprised everyone by kissing both Spears and Aguilera on stage. While the gesture puzzled the entertainment industry, she later explained that it was her way of passing the Queen of the Pop torch to the two young singers. She kissed Spears again earlier this year when she attended her wedding.

Madonna was in the news weeks before she posted her TikTok video after she locked lips with famous Dominican rapper Tokischa, who appeared alongside her in her latest music video for “Hung Up,” in New York. They were also seen kissing at a 2021 Pride event.