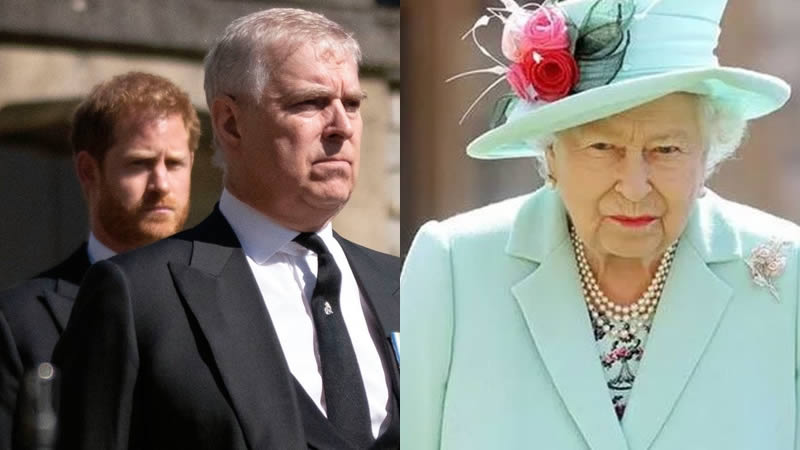 The Dukes of York and Sussex will not obtain Jubilee medals like other members of the Armed Forces, according to reports.

Because they have lost their honorary titles, they will no longer be eligible for the Queen’s Platinum Jubilee medal, which will be presented on February 6.

The commemorative medal will be awarded to serving members of the Armed Forces, police, fire, emergency, and prison services to mark the Queen’s 70th year on the throne.

Members of the Royal family who hold honorary military positions are also eligible.

Only living recipients of the George Cross or Victoria Cross will be eligible for the medal.

This means that Princes Harry and Andrew will be treated the same as all other veterans and will not receive the award.

The Duke of York’s military affiliations and royal patronages were suspended last week as part of his ongoing lawsuit with Virginia Roberts Giuffre, who has accused him of sexual assault. The Duke rejected the claim.

The Duke stepped down from public life in November 2019 due to his relationship with convicted pedophile Jeffrey Epstein.

In a statement last week, Buckingham Palace said: “With the Queen’s approval and agreement, the Duke of York’s military affiliations and royal patronages have been returned to the Queen. The Duke of York will continue not to undertake any public duties and is defending this case as a private citizen.”

Following his decision to step down as a working royal and relocate to the United States in 2020, the Duke of Sussex turned down his three honorary titles: Captain-General of the Royal Marines, Honorary Air Commandant of RAF Honington, and Commodore-in-Chief, Small Ships and Diving, Royal Naval Command.

The Duke of Sussex is seeking a court review of his security arrangements in the United Kingdom, believing that he and his family are entitled to enhanced police protection similar to “others who have left public office.”

They include public figures like Sir Tony Blair, who receives police protection as a result of his former role as Prime Minister and is said to have contributed to the cost.

According to the Duke’s team, the UK is more dangerous for the Sussexes than the US because of the controversy surrounding their departure from the working Royal family and “fixated persons.”

They believe the Home Office has failed to properly consider the threats against them, as well as the impact on the UK’s reputation if he, the Duchess, or their children are harmed while visiting the UK.

The Platinum Jubilee Medal, which serves as a token of the nation’s praise, continues a long history of awarding medals to mark royal jubilees, with the first one awarded in 1887 to mark the 50th anniversary of Queen Victoria’s reign.

The nickel silver medal, designed by Timothy Noad of the College of Arms, features an Ian Rank-Broadley portrait of the Queen on one side and the Latin inscription “Elizabeth II Dei Gratia Regina Fid Def,” which translates as “Elizabeth II, by the grace of God, Queen, Defender of the Faith.”

The reverse features the royal crest as well as the years of the Queen’s Platinum Jubilee – 1952-2022.

It is the Queen’s fourth jubilee medal and the seventh official such award bestowed by a monarch.

Previous medals were officially awarded to celebrate the Queen’s Silver Jubilee in 1977, Golden Jubilee in 2002, and Diamond Jubilee in 2012, making up approximately 450,000 medals.

According to The Telegraph, as with previous jubilees, non-working members of the Royal family who do not hold honorary military positions will likely receive the medal as a gift.

These medals are privately funded and are only commemorative, which means they cannot be worn in public, such as at Remembrance Day events where all military veterans can wear the medals they were awarded during their service.

When the Queen celebrates the 70th anniversary of her reign on February 6, she will be the first British monarch to do so.

The Queen is expected to observe the date privately because it is also the anniversary of her father, King George VI’s, death.

The Platinum Jubilee will be marked by the lighting of beacons, a Thanksgiving Service, a concert, the Platinum Pageant, and nationwide street parties.

Trooping the Colour will take place over a four-day bank holiday weekend from June 2 to 5 on Horse Guards Parade in London.

Continue Reading
You may also like...
Related Topics:Royal Family