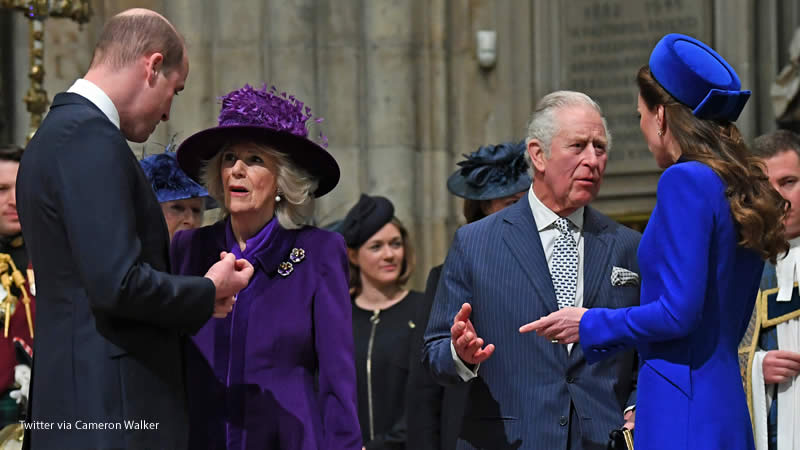 Camilla the Duchess of Cornwall engaged in a sweet chat with her stepson Prince William in her first major event after being named as the future Queen.

The 74-year-old hugged William in Westminster Abbey in England on Monday, where they were joined by Prince Charles and Kate Middleton for the Commonwealth Day service, according to the Daily Mail. The Duchess of Cornwall wore a purple suit and appeared to enjoy chatting with her stepson. They were even seen giggling together.

During the event, Charles and Kate appeared to crack a joke. The Duke and Duchess of Cambridge arrived at the site and kissed each other on the cheeks, according to the Daily Mail.

As per Mail Online, the four British royals expressed sweet words to one another with Camilla telling William “thank you,” “lovely” and “oh wow,” according to expert lip reader Jacqui Press. She added that Charles told Kate, “We could come and see you that Saturday, we are not around that evening.”

The Prince of Wales, The Duchess of Cornwall, The Duke and Duchess of Cambridge, and Princess Alexandra attended the #CommonwealthDay Service at @wabbey.

In this #PlatinumJubilee year, the Service focused on the role that service plays in the lives of people and communities.

Camilla’s first significant public appearance since Queen Elizabeth gave her blessing for the Duchess to use the title of queen when Charles becomes King was at the event. Camilla, Charles, Kate, and William gathered for an annual service to honor the Commonwealth’s 54 member states. After the 95-year-old monarch missed the Commonwealth Service for the first time in nearly a decade, they took her place.

The Queen had previously expressed her wish that the Commonwealth “remains an influential force for good in our world for many generations to come.” She also reaffirmed her 1947 commitment to “always be devoted in service.”

The monarch had hoped to attend the event after recovering from coronavirus and facing mobility challenges. However, palace sources stated that the Queen, who is also the Commonwealth’s Head of State, had asked her son Charles to attend the service in her place.

Meanwhile, William is claimed to be “supportive” of the Queen’s decision to elevate his stepmother to the position of Queen consort. Although the late Princess Diana’s son was not involved in the decision-making process, he is believed to be “respectful” of the Queen’s reasons.