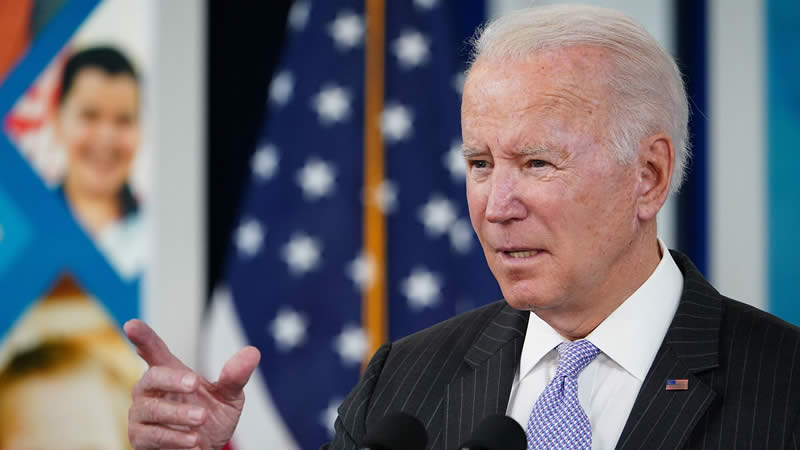 President Joe Biden has said that fighting inflation in the United States is his “top priority” after government data showed that it reached a 30-year high last month, underscoring the ongoing threat to his presidency and the economic recovery.

The sharp increase in the consumer price index (CPI) in Labor Department data released Wednesday surprised economists and the White House alike, and it comes as Biden prepares to travel to Baltimore to promote the $1.2 trillion infrastructure upgrade he claims would turn the tide.

“Inflation hurts Americans pocketbooks, and reversing this trend is a top priority for me,” Biden said after the report was released.

“I am travelling to Baltimore today to highlight how my infrastructure bill will bring down these costs, reduce these bottlenecks and make goods more available and less costly.”

Inflation had stayed muted in recent years, but it burst back with a vengeance this year as American businesses restored normal operations thanks to Covid-19 vaccines.

Prices were pushed up by high demand from cash-rich consumers, as well as shortages of US employees and snarls in global supply chains that delayed deliveries of essential components such as semiconductors, which are used in the production of automobiles and electronic devices.

While Biden has claimed that the increases are only temporary, they have presented his opponents with a strong counterargument to the spending plans on which he has placed his presidency as his approval ratings dwindle.

He won a victory when Congress passed the infrastructure bill last week, but the $1.85 trillion Build Back Better plan to improve social services is still mired by infighting among Biden’s Democrats, who control the legislature by a narrow majority.

Democratic Senator Joe Manchin, who has criticized the plan’s cost, tweeted in response to the CPI report, “By all accounts, the threat posed by record inflation to the American people is not ‘transitory’ and is instead of getting worse.”

The 6.2% increase in CPI over October 2020 was the largest annual gain since November 1990, and it came as prices for everything from automobiles to gasoline rose, as per the Labor Department.

CPI jumped 0.9% in October compared to September, more than double the previous month’s gain and above economists’ predictions.

Much of the increase was observed in energy prices, with gasoline rising 6.1% in a single month and fuel oil rising 12.3%.

Biden stated that he has directed his National Economic Council to look into measures to reduce these prices and that he has also directed the Federal Trade Commission to crack down on price gouging in the energy market.

Grocery prices increased 1% last month, with food at home rising 1% and food away from home, such as restaurant meals, up 0.8%.

Americans have been able to resume dining out, but restaurants, like other companies around the nation, have struggled to rehire workers who were laid off during the pandemic.

Throughout 2021, used cars experienced an unusual price increase, which boosted overall inflation. After dropping in August and September, the October report showed a 2.5 % increase.

According to the report, despite a nationwide housing shortage, housing prices, including rent, increased, with a 0.5% increase in the shelter category.

Food and energy prices are unpredictable, but even without them, “core” CPI increased 0.6 % last month, compared to a 0.2% increase in September.

According to the report, it has increased by 4.6% in the last year, more since August 1991.

“I hate to say this, but October’s core CPI is just a taster; the next few months are going to be horrible,” Ian Shepherdson on Pantheon Macroeconomics tweeted.

The rapid price hikes also create a contradiction for the Federal Reserve, which has indicated that it will begin reducing its monthly purchases of Treasury bonds and securities intended to help the economy during the pandemic but has also stated that it will be patient before raising interest rates.

Some economists believe the central bank will have to act more aggressively to maintain prices in check.

According to Kathy Bostjancic of Oxford Economics, inflation may worsen in the following months before decreasing next year, but if that does not happen, the central bank may have to shift gears quickly.

“Strong demand and constrained supply will drive inflation higher in early 2022 which could lead the Fed to raise rates earlier than our December 2022 forecast,” she said, adding it may also be forced to increase the pace of its tapering.