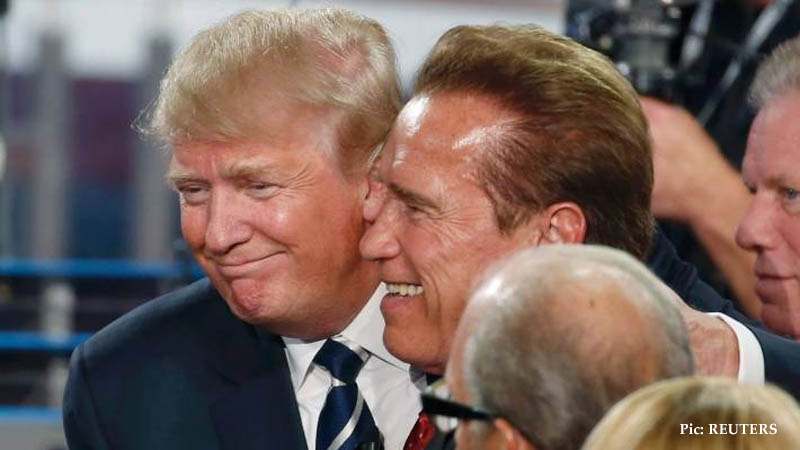 Celebrity feuds are an exciting conflict to watch for people because of the recent social media growth. They might be friendly banter at times, but they can also evolve into heated debates. As a result, the feud between Arnold Schwarzenegger and Donald Trump is interesting.

On Twitter, two of the most powerful people go head to head. Arnold, on the other hand, remembers Trump not joking with him in private, according to Essentially Sports reported.

However, he mentioned Trump challenging him to a Twitter war, which perplexed the famed bodybuilders. He revealed new details about the feud as well as his feelings towards Trump.

The duo stepped up to the plate to play ‘Spill Your Guts or Fill Your Guts’ on The Late Show with James Corden. It’s a fascinating game in which Corden showers his guests with difficult questions while keeping an entrée of delectable delicacies on the table. Well, that wasn’t too delicious! During the game, Corden asked Schwarzenegger if Trump had ever said anything hurtful to him privately. Arnold thought over the reaction and spoke about Trump’s antics with a faint smile.

“In private, he was always very nice. As a matter of fact, the last conversation I had with him, a private conversation, was when he called me and asked me for my endorsement when he ran for president. I declined. Since then, everything that he says about me or to me is on Twitter, which sucks. So I think he is always kind of nice in private. But, in public, I think that’s very mean-spirited by what he says,” said Arnold.

He saved himself from the weird dishes on the table as fans burst into laughter.

A battle for ages

The battle between the two superstars is incredible, and Arnold says he understands why Trump despises him. He mentioned that Trump aspired to be like him and that he was “in love” with Arnold. Similarly, there are several cases of their clash. In 2017, Trump tweeted about Arnold Schwarzenegger’s appearance as a host on “The New Celebrity Apprentice,” claiming that his presence had a negative impact on the show’s ratings.

As a result, their battles continue forever. However, Arnold’s impressions of the former president were revealed on the James Corden show. The bodybuilding legend brilliantly reacted to Trump’s actions in public rather than in private. What are your views on the feud?