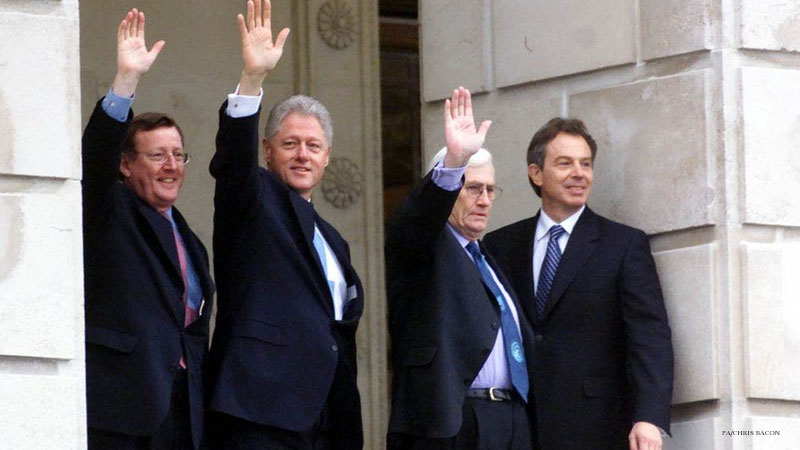 The Good Friday Agreement, according to former British Prime Minister Sir Tony Blair, would not have been possible without David Trimble.

Age 77, Lord Trimble passed away on Monday. He played an important role in negotiating the Good Friday Agreement in 1998.

The worst of the Troubles in Northern Ireland were put to an end by this peace agreement.

Between 1995 through 2005, Lord Trimble served as the Ulster Unionist Party’s (UUP) leader.

He shared the Nobel Peace Prize with the leader of the Social Democratic and Labour Party (SDLP), John Hume, and was the first member of the new Northern Ireland Executive appointed as part of the Good Friday Agreement to hold the position of the first minister, as per BBC News.

Lord Trimble has held a seat in the House of Lords since 2006.

His opposition to the Northern Ireland Protocol, a provision of the 2019 Brexit agreement that keeps Northern Ireland in the EU’s single market for goods and averts a hard border with the Republic of Ireland, has been outspoken in recent years.

According to Lord Trimble, it puts the Good Friday Agreement at risk.

To honor the passing of the former first minister, it appears that assembly members will be called to Stormont the following week.

On Tuesday, they will have the opportunity to honor him during a special sitting.

Monday in Lisburn is scheduled to be the day of Lord Trimble’s funeral.

Several councils in Northern Ireland are opening books of condolence.

In a statement, President Clinton said he and his wife were “deeply saddened” by Lord Trimble’s death, saying his “lifetime of service helped bring peace to Northern Ireland”.

“Time after time during the negotiations that led to the Good Friday Agreement, he made the hard choices over the politically expedient ones because he believed future generations deserved to grow up free from violence and hatred.

“His faith in the democratic process allowed him to stand up to strong opposition in his own community, persuade them of the merits of compromise, and share power with his former adversaries. His legacy will endure in all who are living better lives because of him today.”

As a youthful hardliner in the 1970s, Lord Trimble’s political career saw him compromise to help bring about an executive and assembly at Stormont where unionism and nationalism shared power.

He was praised highly for his role in putting an end to Northern Ireland’s protracted violence.

Lord Trimble made an “immense” contribution to the peace effort, according to Sir Tony.

“It was a masterclass in leadership,” he told BBC’s Radio Four’s Today program. “He saw the chance of being able to settle the issue on terms that were acceptable to unionism.

“He was never in any doubt that he was going to be accused of betrayal. He paid the political price for that.”

“Once he said he would do something, he did it, that was absolutely invaluable to the trust needed to make the process work.”

Former Taoiseach (Irish PM) Bertie Ahern, who led the Irish government at the Good Friday Agreement negotiations, said Lord Trimble was courageous and that although they had “many a row, many arguments”, they were able to laugh about that in later years.

“We got on very well. We had lots of one-to-one conversations,” he told the BBC’s Good Morning Ulster program.

“Of course, we fought, of course, we had differences and some of them were fiery. There’s no use saying they were not. But we always kept negotiating and dealing with the issues in front of us.

“The reality is, in his time as the first minister, with the up and downs and suspensions in the institutions, he stuck with it.”

Even though Lord Trimble and Gerry Adams had fundamentally different viewpoints at the time of the Belfast Agreement, Gerry Adams, the head of Sinn Féin, indicated that he always felt Lord Trimble was devoted to the peace effort.

“David’s contribution to the Good Friday Agreement and to the quarter century of relative peace that followed cannot be underestimated,” Mr. Adams said.

“David Trimble was a man of courage and vision. He chose to grasp the opportunity for peace when it presented itself and sought to end the decades of violence that blighted his beloved Northern Ireland,” Mr. Beattie said.

“The bravery and courage he demonstrated whilst battling his recent illness was typical of the qualities he showed in his political career, at Stormont, and at Westminster.”