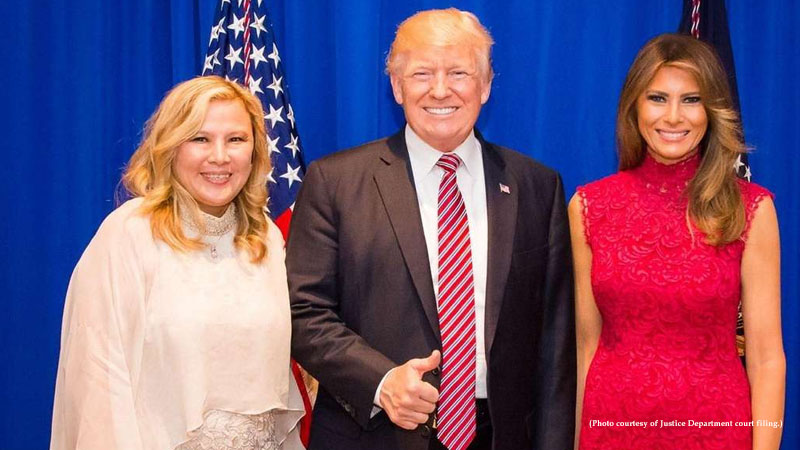 Two people have been accused of running a multi-year scheme that allegedly raised at least $27 million from foreign investors. The scheme involved funding a fictional school, making false promises of green cards in exchange for investments, and promising access to influential American politicians, including former President Donald Trump, in exchange for money that was allegedly used in a straw donor scheme.

Sherry Li and Lianbo “Mike” Wang were detained on Monday and accused in a complaint that was unsealed on that day of conspiring to commit wire fraud, money laundering, and conspiracy to defraud the US by hindering the Federal Election Commission’s enforcement of campaign finance rules. Attorneys for Li and Wang have been contacted by CNN for comment.

Li is accused of coming up with a plot to deceive investors by persuading them to fund a false proposal to create a private school from her house on Long Island beginning in 2013. According to the complaint, Wang functioned as general manager of the bogus Thompson Education Center, and Li and Wang reportedly stole money for their own use, including housing, trips, clothing, jewelry, and political donations to well-known politicians.

According to the prosecution, Li and Wang used images they took with Trump and the former first lady Melania Trump to entice investors to donate to their business and served as straw donors for foreign people who gave money to US politicians and political parties, including Trump.

CNN has reached out to representatives of Trump and the Republican National Committee for comment.

“As alleged, the defendants enticed their victims to invest in a fraudulent scheme aided by misleadingly claiming that their fictitious project had the support of prominent politicians,” United States Attorney Breon Peace said in a statement.

“The defendants were able to perpetuate this fraud by then selling access to U.S. politicians by unlawfully contributing foreign money to political campaigns in their own names and bringing foreign nationals as their guests to fundraising events,” Peace added.

Li and Wang, both US citizens, are accused of bringing foreigners to fundraisers for American politicians in exchange for payments from the foreigners, who were then used by Li and Wang to make political contributions under their own names, despite receiving many alerts that foreigners are not permitted to do so.

The Trump International Hotel in Washington, DC hosted a political event on June 28, 2017, that raised money for a joint fundraising committee, according to the prosecutors. Li and Wang allegedly attended the event and posed for pictures with Donald and Melania Trump as well as the 12 Chinese and Singaporean nationals they had arranged to attend.

According to the complaint, FEC records show that the joint fundraising committee received a $270,500 contribution in Li’s name and that “financial records reflect that this check was funded by multiple wires totaling hundreds of thousands of dollars received from Hong Kong-based banks accounts.” A review of FEC donor data from June 2017 shows a contribution of $270,500 to Trump Victory PAC, among other contributions.

In addition, the complaint claims that Wang gave the joint fundraising committee a check for $329,500 that “was paid by the identical wires from the Hong Kong-based bank accounts” as Li’s check was. Wang gave $329,500 to Trump Victory PAC in June 2017, according to FEC contributor statistics, among other things.