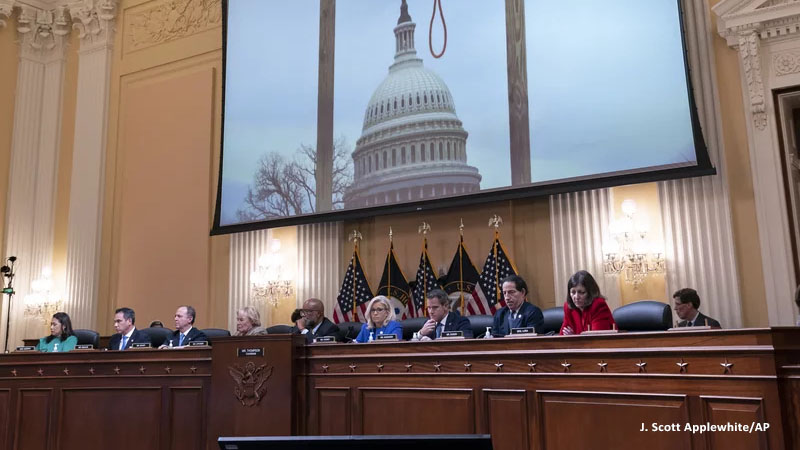 On Monday, two panels of in-person witnesses will testify in front of a House committee probing the deadly incident at the US Capitol on Jan. 6, as the panel continues to make its case that former President Donald Trump was to blame for the disturbance.

The committee stated Monday morning that Bill Stepien, former President Donald Trump’s campaign manager, will no longer participate in today’s hearing “due to a family emergency.” The session will start 30-45 minutes later than expected, at 10 a.m.

According to a source familiar with the matter, Stepien’s wife went into labor, which stopped him from testifying.

Today’s hearing is focused on the “the decision by the former president to ignore the will of the voters, declare victory on election he lost, spread claims of fraud and then decide to ignore the rulings of the courts when the judgment of the courts didn’t go his way,” House select committee aides told reporters on Sunday. The hearing will look at the “political apparatus to drive fundraising” to bring in hundreds of millions of dollars between Election Day and Jan. 6, they said.

They also said that the committee will provide a “great deal” of new information, primarily in the form of documents and depositions.

Who’s on the witness panels

The committee said that Stepien would not testify Monday morning, but that his counsel would appear and make a statement in his place. A source familiar with the issue told NPR that video recordings of Stepien’s previous testimony to the committee will be shown at the hearing.

From July 2020 till the election, Stepien served as Trump’s campaign manager. He previously worked as a deputy campaign manager for much of the 2020 campaign while Brad Parscale was in charge, and he also worked as a political director inside the White House at the start of Trump’s administration after working on the 2016 Trump campaign. Stepien was scheduled to testify under oath. Over the course of its almost 11-month inquiry, the panel subpoenaed about 100 persons, including members of Congress.

Chris Stirewalt, the former Fox News digital political director who was fired after the election, will testify.

Ben Ginsberg, a seasoned GOP election lawyer who was outspoken about Trump’s election lying even before the 2020 election, is on the second panel. He’ll testify alongside BJay Pak, the former US attorney for the Northern District of Georgia, who abruptly resigned after the disclosure of a taped phone call in which Trump pressed Georgia state officials to “find” enough votes to overturn President Biden’s victory. Trump mentioned a “never-Trump U.S. attorney” in Georgia during the call, but he didn’t specifically mention Pak.

Al Schmidt, a Republican former Philadelphia city commissioner who was outspoken in the days and weeks after the election defending the city’s election administration as Trump allies launched unfounded allegations of fraud and legal action that failed to show any widespread issues with the vote count, will also be in attendance.

A federal judge chosen by former President George W. Bush dismissed a Trump campaign action against Philadelphia officials after admitting that their claim that Republican observers were banned from the city’s ballot-counting facility was false.

At the first hearing, on Thursday, panel Chairperson Rep. Bennie Thompson said Trump was at the center of the conspiracy that the 2020 election was stolen from him and then “spurred a mob of domestic enemies of the Constitution to march down to the Capitol and subvert American democracy.”

According to committee staffers, California Democrat Rep. Zoe Lofgren will play a key role in the panel’s second presentation. The meeting will take about two hours, with a 10-minute break in the middle.

The presentation will be organized chronologically, starting on Election Day, continuing through Election Night, and ending on January 6. The panel is expected to release a detailed report on its conclusions in September.