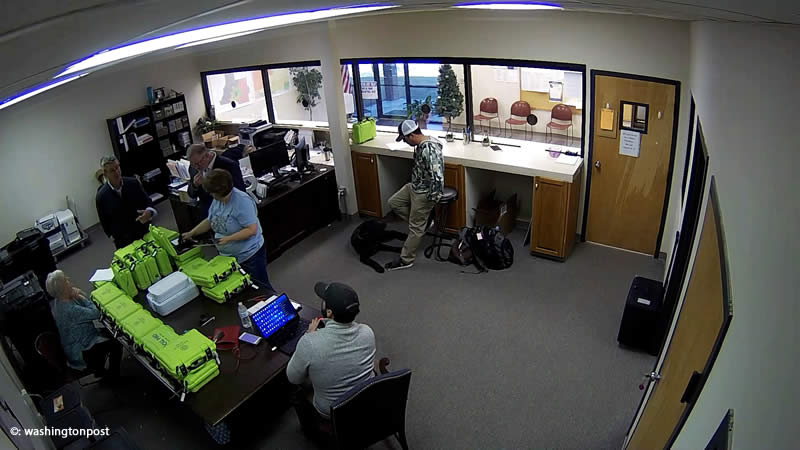 According to Drew Griffin, the video shows a team of operatives working for pro-Trump attorney Sidney Powell, as well as Cathy Latham, who acted as a fake Georgia elector for the Trump campaign.

Griffin pointed out that this footage was shot on January 7th, 2021, one day after the deadly Trump-inspired riots at the US Capitol Building aimed at preventing Congress from certifying the results of the 2020 election, as the Washington Post reported.

Latham previously stated that she was not personally involved in a violation of the Coffee County elections office, but that claim is undercut by the footage showing her with the Trump operatives in the restricted area.

Griffin then reported that anyone seen inside the restricted area could face serious legal consequences.

“The Georgia Secretary of State’s office calls what happened in Coffee County criminal behavior and a state criminal investigation is underway,” he said.

An attorney for SullivanStrickler acknowledges in an email dated August 29, 2022, that Latham was the “primary point of contact” in coordinating the team’s visit to Coffee County.

The firm stated that it had no reason to believe that these attorneys would ask or direct it to “do anything improper or illegal.”

A lawyer for Latham disputed the claim that she was the primary point of contact for the SullivanStrickler team, telling that the phone calls she can be seen making in the video are not with anyone from the firm.

A second lawyer representing Latham, Bob Cheeley, previously told CNN, “Cathy Latham has dedicated significant time and effort over many years protecting the integrity of elections in Coffee County, Georgia. She would not and has not knowingly been involved in any impropriety in any election.”