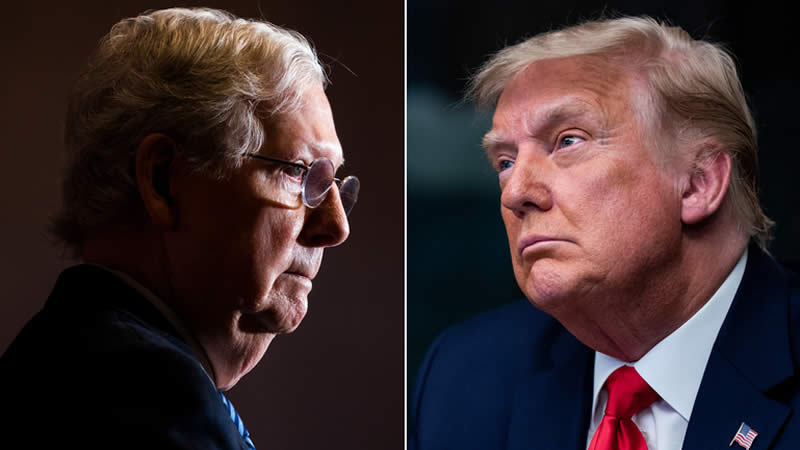 McConnell, a Kentucky Republican, offered Democrats a double deal to give them extra time to get the approval of a long-term debt limit by employing a budgetary technique that did not require a single GOP vote. As part of the agreement, Republican senators would help accelerate budget reconciliation if Democrats raised the debt limit themselves.

“The Senate is moving toward a plan I laid out yesterday to spare the American people a manufactured crisis,” McConnell said.

“The Republican Senate needs new leadership,” Trump said during an interview with Fox News’s Sean Hannity on Thursday night. “I’ve been saying it for a long time. Mitch is not the guy. He’s not the right guy. He’s not doing the job.”

Trump said that McConnell had not only provided the Democrats “a lifeline,” but also gave them more “time to figure out what to do.”

“They were in a really big bind. They wouldn’t have been able to do anything,” Trump said. “He had the weapon, and he was unable to use it.”

The Senate voted 50-48 on Thursday night to delay the coming debt crisis for a few months, extending the deadline to December 3 and granting the Treasury around $480 billion in borrowing authorization.

In a press statement Thursday evening, Trump lambasted McConnell for buckling and urged Republican lawmakers not to vote for the “bad agreement” sponsored by “folding Mitch McConnell.”Treasury Secretary Janet Yellen warned earlier this month that the United States was on the verge of a recession unless Congress raised the debt ceiling by Oct. 18, a deadline set to encourage lawmakers to act fast.