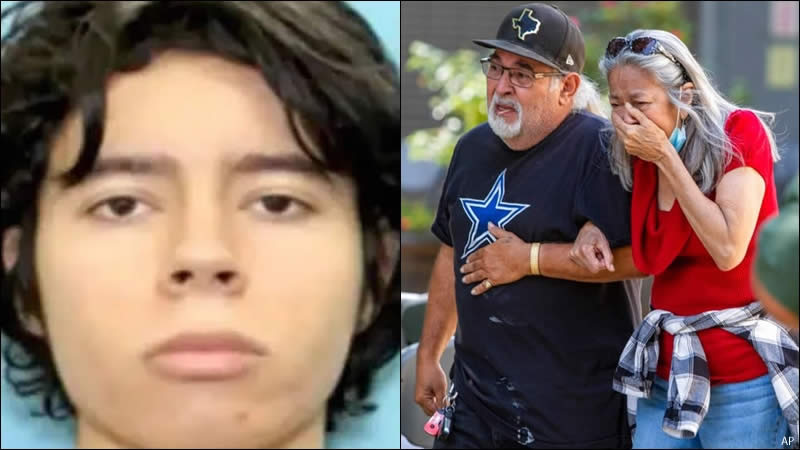 The man who opened fire in a Texas elementary school Tuesday, killing 19 children and two adults, was a loner who kept to himself and avoided any kind of conversation, according to the boyfriend of the gunman’s mother.

Ramos, according to Alvarez, left his mother’s home two months ago to live with his grandmother after an intense argument with his mother after he disconnected the Wi-Fi.

He went on to say that whenever he tried to start a conversation, Ramos would shut down and leave.

“He was kind of a weird one. I never got along with him. I never socialized with him. He doesn’t talk to nobody,” he said. “When you try to talk to him he’d just sit there and walk away.”

Alvarez stated that Ramos had been behaving weird for some time, but he was “shocked” to learn that he was the gunman in Tuesday’s shooting.

Adriana Reyes, Ramos’ mother, also stated that she was not aware of the shooting.

Reyes was in San Antonio on Wednesday to see her mother, who was in critical condition after being shot before Ramos went to school.

“I’m very upset about everything,” Reyes, 39, said by phone. “A lot of stuff has happened, but right now, I don’t feel good.”

According to an interview conducted in Spanish with The Associated Press, Ramos’ grandfather, Rolando Reyes, who lived in the home with Ramos and his grandmother, said he had no idea his grandson had guns in the house.

The FBI was investigating the matter at Reyes’ home on Wednesday, according to the Associated Press.

According to the Associated Press, Reyes stated that he spoke to his grandson on a daily basis and that he “didn’t expect this” from Ramos.

However, Becky Flores, 54, who lives next door to Ramos’ mother and was Ramos’ Head Start teacher, described the home as chaotic.

Flores stated that there have been so many disturbances, one of which happened two months ago when eight police officers arrived on the day Ramos left to stay with his grandmother.

But, she claims, none of it signaled the violence that occurred on Tuesday.

“I don’t know what made him do this,” Flores said.

A woman recognizing herself as the gunman’s aunt told NBC News that “misconceptions” about him had spread.

“Nobody knew him. Nobody was there with him. I lived with him in the home, like, nobody knew what he was going through, like nobody,” said Shelby, who didn’t provide her last name. “Everybody has their own perspective of everything going on, but no one knows what everybody holds. Everybody holds things inside. People go through things nobody understands.”

Republican Gov. Greg Abbott stated on Wednesday that the gunman had no history of mental illness.

Abbott stated that “there was no meaningful forewarning of this crime” other than three Facebook messages.

The first, posted 30 minutes before the gunman arrived at the school, was about his intention to shoot his grandmother, according to Abbott. The second claimed he had murdered his grandmother. The third involved the intention of killing an elementary school. The last post was made less than 15 minutes after the gunman entered the school.

According to Andy Stone, a spokesperson for Meta, Facebook’s parent company, the messages were private one-on-one text messages found during the shooting.

According to those who knew Ramos, his behavior had become increasingly concerning.

According to Santos Valdez Jr., 18, told the Washington Post the two had been friends since elementary school until Ramos’ behavior changed.

According to Valdez, Ramos would normally drive around with another friend, shooting at random people with his BB gun and egging people’s cars.

According to Valdez, Ramos once met him at a park where they constantly played basketball with cuts all over his face, initially blaming the injuries on a cat.

“Then he told me the truth, that he’d cut up his face with knives over and over and over,” Valdez told the newspaper. “I was like, ‘You’re crazy, bro, why would you do that?’”

Valdez said Ramos replied that he did it for fun, The Post reported.