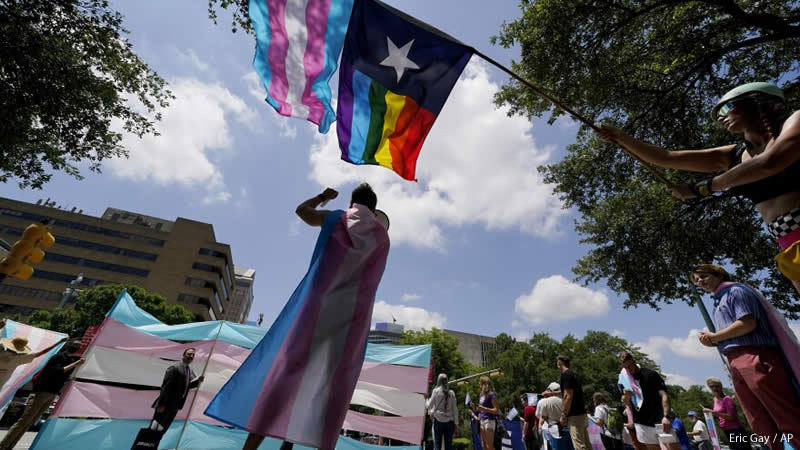 This was part of a complicated, nuanced judgment in the continuing lawsuit over Gov. Greg Abbott’s trans “abuse” decree, indicating that the court may be wary about the state’s standing in the case.

While neither party received exactly what they desired in the May 13 decision, Shelly Skeen, a senior attorney at Lambda Legal representing the plaintiffs, told the Chronicle that the ruling was a triumph for trans young people and their families in general.

The court stressed the significance of the rule of law, which the state has attempted to ignore.

“The law is clear and the law says parents have to provide medically necessary care for their kids, and to not do so is child abuse,” she told us.

Attorney General Ken Paxton attempted to have the case dismissed outright, but the judge refused. It upheld a restraining order against Child Protective Services investigations into transgender families, but it also limited the breadth of the restraining order such that it no longer applies to all families in Texas, only the anonymous family and Houston-based psychologist involved in the complaint.

This last ruling may appear to be a loss for trans rights, and many media outlets viewed it as such (such as The New York Times, whose headline read “Texas Court Allows Abuse Inquiries of Parents of Transgender Children”). Skeen and other legal experts argue that this reduces the decision’s real content, which strongly criticizes the state administration. Chase Strangio, the ACLU’s deputy director for transgender justice, lamented the misleading headlines.

“No family should be investigated solely because they are treating their adolescent child with medically prescribed care for gender dysphoria,” Strangio tweeted. “That is the takeaway.”

Indeed, the judges emphasized in clear terms that Paxton’s original legal opinion on gender-affirming health care, issued late last year, is legally nonbinding and that Abbott overstepped his abilities as governor with his subsequent attempts at policymaking: “Unlike the federal constitution, the Texas Constitution does not vest the executive power solely in one chief executive. … Unlike some executive orders of the Governor that are afforded binding legal effect by statute, the Governor’s letter cites no legal authority that would empower the Governor to bind state agencies … and we are directed to none.”

Texas advocacy groups claim the restraining order was only narrowed on a technicality, and they are now waiting to see how the Department of Family and Protective Services responds to the verdict. Prior to the restraining order, over a dozen families were being examined.

It’s crucial to remember that all of this is just pre-event legal wrangling. The case was filed in March before District Judge Amy Clark Meachum in Travis County, but it is awaiting further orders from the 3rd Court of Appeals before she can hear it. Regardless of her decision, Skeen thinks the case will be appealed back to SCOTEX, a process that could last until 2023. “We haven’t gotten to the merits of our claims yet; we’re not even there,” she said. “Right now, all roads lead back to the trial court.”