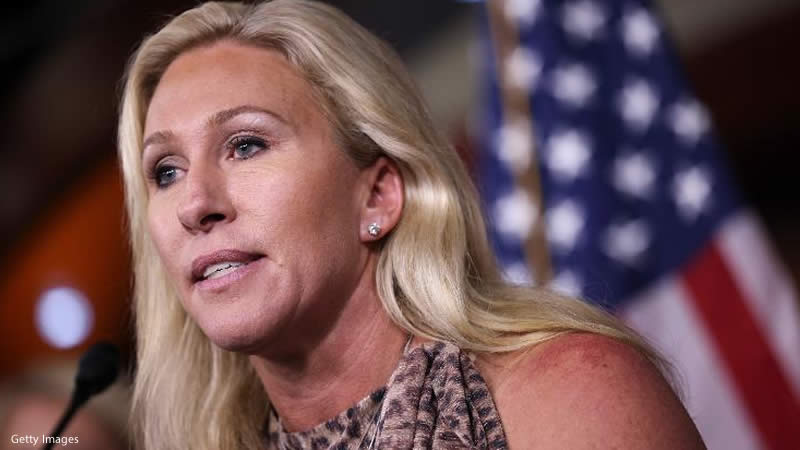 Greene complained about Stacey Abrams, who has announced that she will run for Governor of Georgia again, during an appearance on former White House aide Sebastian Gorka’s radio show.

If Abrams is chosen, she will be the first Black woman to hold the position. Greene, who has been working against voting rights in one of the battleground states at the center of Donald Trump’s Big Lie, is not happy.

Like many right-wing members of the Republican Party, Greene pushed the false fear tactic that Democrats want to “take away” legally owned firearms. “The next thing she talked about was grabbing people’s guns,” Greene said of Abrams’ announcement speech. “She hates Georgia’s Second Amendment rights. She wants to stop constitutional carry.”

“Ultimately, the truth is it’s our Second Amendment rights, our right to bear arms, that protects Americans and gives us the ability to defend ourselves from a tyrannical government,” Greene stated, misinterpreting the wording of the Second Amendment. “And I hate to use this language, but Democrats, they’re exactly … they’re doing exactly what our Founders talked about when they gave us the precious rights that we have.”

Greene’s public behavior appears to have become increasingly unstable as more information about the rally’s planning emerges from the House Select Committee on January 6th, and some of her colleagues have stopped joking about her and have begun voicing genuine concerns that the pro-gun Greene may literally take the law into her own hands.

Marjorie Taylor Greene is encouraging people to use their second amendment rights on Democrats. I would like to know why under the 14th amendment, she still has a job?

Rep. Stevens has asked for help from Capitol Police, noting that Greene would be investigated for her threats in any other workplace or school. She also expressed “genuinely concern” about Greene’s mental health.