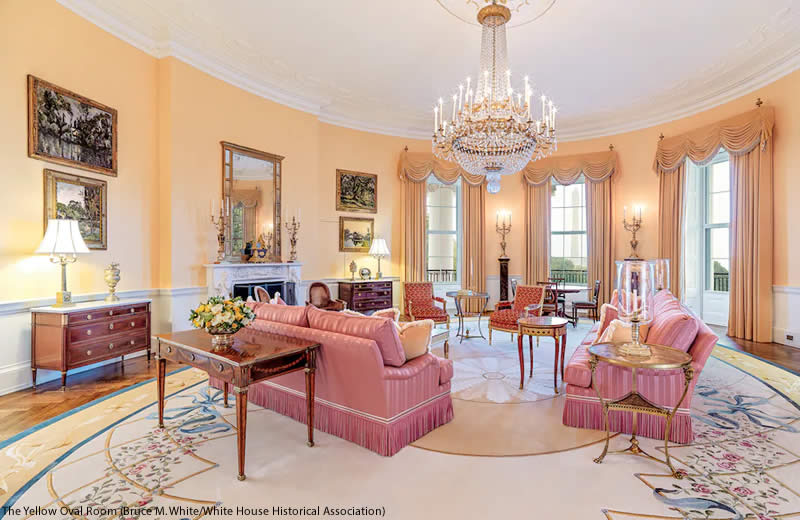 The White House: An Historic Guide, a new book, is offering readers a view inside the Washington, D.C. house. When Melania and Donald Trump resided there, the former wouldn’t allow outsiders to see how she redecorated the second-floor rooms and private quarters.

“There was a whole lot of swagging, fringing, and gilding going on upstairs,” The Washington Post noted.

“The rug is an American-made rug we funded to go in this space. Mrs. Trump was very involved in the style and design of this rug, which includes roses, blue ribbons, and a yellow border and trellis motif that goes around the perimeter of the rug,” Stewart D. McLaurin, president of the White House Historical Association, said.

The Queens’ Bedroom has been renovated by Melania and Kannalikham and is ready to welcome important visitors.

“I don’t recognize that new bed from the White House collection,” Betty Monkman, former White House curator, said. “The hangings have a sort of French look, and if you look at old photos of Jackie Kennedy’s bedroom at the White House it has this sort of French crown with similar hangings. Taking away the heavy four-poster bed gives the room a lighter, more feminine look.”

The walls were a different color prior to the Trump moving in.

“With designing the interiors, whether it was the public rooms or the private quarters, first lady Melania Trump and I had a very similar vision with the goal of incorporating design elements that conveyed ultimate respect for the house and what it stands for.

We worked closely on every aspect, putting a great deal of time and effort into the research and careful consideration into the final selections. In each decision, I was conscious of how important it was to the overall impact on the legacy of the People’s House,” the interior designer said.

She continued, “We were also very focused on creating interiors that conveyed a feminine strength, incorporating softer colors such as muted pinks, creams, and soft blues with Classical structure to highlight this. It was important that the design honored the legacy of all First Ladies and the strength of American women. Delicate floral details included in the redesigning of the rug in the Yellow Oval Room is an example of how that idea was incorporated into the interiors.”