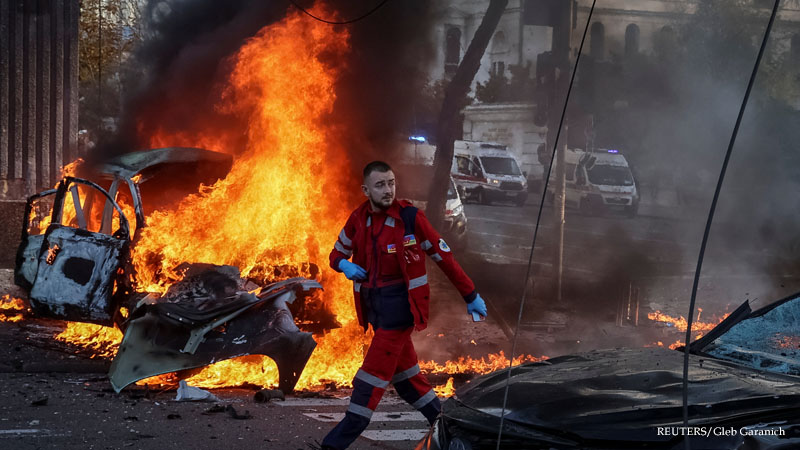 The morning’s brutal attack on the Ukrainian capital of Kyiv was captured on camera from across the city, showing the horrific explosions, and was quickly followed by further strikes across the entire country.

Haunting videos captured the exact moment Ukraine’s capital Kyiv came under fire from Russia, this time in retaliation for the Crimea bridge bombing.

At least eight people were killed in the horrific attacks carried out by Russia across the country, with videos revealing the extent of the devastation.

The terrifying moment the program was interrupted by Russian explosions that rocked Kyiv was captured on camera by a BBC presenter mid-broadcast.

When rockets were heard raining down on the city, a Ukrainian girl was walking down the street, filming herself, when the blast nearly engulfed her.

Others in the city captured the heartbreaking moment and its aftermath on video. The city hadn’t come under siege for months until this morning’s attacks, thought to be an attempt at revenge after the Kerch bridge, connecting Russia to Crimea, was bombed over the weekend.

Following the brutal bombing, Ukrainian President Volodymyr Zelensky issued a short video address in which he stated that Iranian missiles had been fired at cities such as Kyiv, Dnipro, and Lviv and that they desired “panic and chaos.”

A particularly upsetting video shows a young Ukrainian girl filming herself as she walks down the street. The missile strike, however, cut her off, and viewers can see her terrified expression as she first turns towards the noise of the bombing above Kyiv.

The video then bursts forth in the light of the explosion, with debris being blown across the camera and her being knocked back by the force of the blow.

She screams and starts running for safety.

The same attack was captured from a different angle this morning by the BBC, which reported from Kyiv, Ukraine’s capital.

Hugo Bachega, the presenter, was reporting on the destruction of the Kerch bridge, a shocking counter-attack that dealt a hammer blow to Vladimir Putin’s stuttering invasion.

When the reporter paused and looked behind him, the iconic golden domes of St. Michael’s Monastery could be seen.

He tried to continue the broadcast before looking back as loud noises could be heard across the Kyiv sky, followed by an explosion.

As the broadcast returned to the studio, the reporter ducked out of their chair.

It unintentionally captured the shocking strike on Ukraine’s capital city, which many saw as retaliation for the attack on the Crimea bridge.

According to initial reports, the blasts, which were believed to be caused by missile strikes, resulted in deaths and injuries.

Another video of the explosion shows a man walking along a bridge in the sun, going about his morning routine.

A massive explosion shakes the scene from the left, sending him escaping for cover as fire and smoke billow across the screen.

“Several explosions in the Shevchenskivskyi district – in the center of the capital”, former heavyweight boxing champion Klitschko said on the Telegram messaging app.

“The details are being confirmed,” the spokesperson said.

Mr. Zelensky said in a video address. “(The Russians) chose such a time and such targets on purpose to inflict the most damage.”