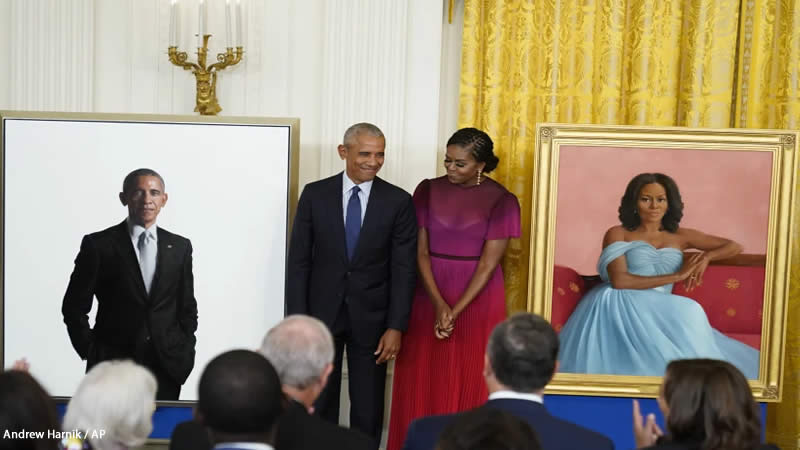 In attendance at the unveiling of their official portraits alongside President Joe Biden and First Lady Jill Biden, Barack and Michelle Obama made their first joint trip back to the White House since their departure as president and first lady in 2017.

President Biden gave a statement recognizing Obama as “one of the most consequential presidents in history” after first showing the paintings to the American people; Barack was portrayed by photorealistic painter Robert McCurdy, while Michelle was created by artist Sharon Sprung.

Michelle’s outfit for the occasion, though, was equally striking as the Obamas’ portraits.

Michelle, widely considered one of the most fashionable first ladies in history, demonstrated that she hasn’t lost her sense of style since leaving the White House by donning a custom-made purple and red pleated crepe ombré silk dress made by her trusted tailor Christy Rilling. A pair of elegant drop earrings and a pair of chic black shoes completed the outfit.

For the portrait, which will hang in the White House as part of the residence’s permanent collection, Michelle wore an elegant off-shoulder dress in baby blue reportedly designed by Jason Wu, lending the image a more traditional feel than her famous 2018 portrait by Amy Sherrard that hangs in Washington’s National Portrait Gallery.

(While the Obamas were able to select their own artists in 2018, the paintings today were commissioned by the White House Historical Association.)

As per the washingtonpost, Michelle Obama is making her first trip back to the White House since her husband’s term as president ended. Barack Obama visited the White House earlier this year to take part in a ceremony commemorating the Affordable Care Act’s anniversary.

(Breaking with historical precedent, Trump refused to invite the Obamas to return to the property or have their portraits unveiled during his tenure.) “For me, this day isn’t about me or Barack,” Michelle told the assembled guests. “It’s not even about these beautiful paintings.

It’s about telling that fuller story, a story that includes every single American in every single corner of the country so that our kids and grandkids can see something more for themselves.” Michelle Obama was the center of attention despite her humble message, in part because to her striking look today.