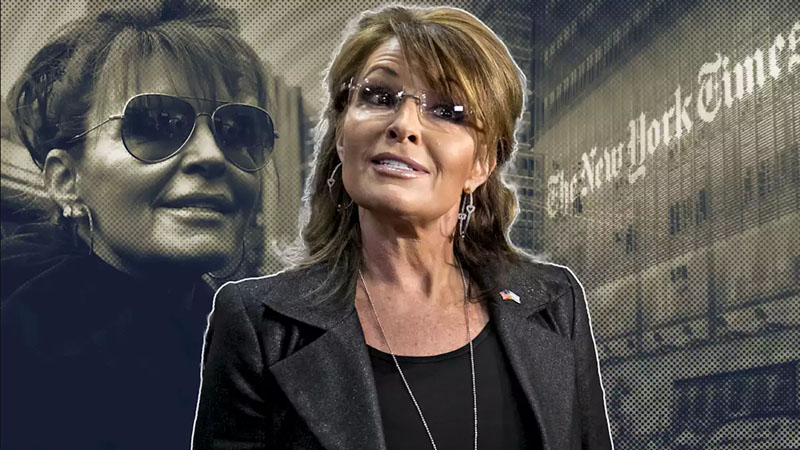 “The 360” shows you diverse perspectives on the day’s top stories and debates.

The defamation case filed by former Alaska governor and vice-presidential candidate Sarah Palin against the New York Times finally got to trial this week after years of false starts, appeals, and COVID-related delays. Because of who is involved, the court battle was bound to get a lot of attention, but legal experts say the case might also be a turning point for laws protecting the press when it covers high-profile figures.

The argument revolves around a New York Times editorial from 2017 that discussed the hazards of harsh political rhetoric.

The article included a claim that “incitement” from Palin’s political action committee was linked to a 2011 shooting that severely wounded former Rep. Gabrielle Giffords and left six others dead.

That claim, however, was untrue, and the New York Times eventually issued a clarification, stating that there is no proof linking Palin’s committee to the gunman.

No one denies that the newspaper made a false claim against Palin. However, it is not illegal for the media to make a simple error, which the Times claimed was the case. Palin and her lawyers will have to show that the Times knew the assertion was false and published it regardless in order for it to be considered defamation. The “actual malice” criterion was established in the 1964 Supreme Court case New York Times Co. v. Sullivan.

For nearly 60 years, the decision has supported American journalism and made it difficult — but not impossible — for prominent figures to sue the media.

With the current state of the law, one of Palin’s lawyers admitted that they face an “uphill” battle in the case. According to court records, if Palin’s side loses, they may file an appeal in the hopes of having the case heard by the Supreme Court again. Conservatives have been calling for the repeal of present press restrictions for the past few years. Before assuming office, former President Donald Trump stated that he wanted to “open up” libel laws. Clarence Thomas and Neil Gorsuch, both conservative Supreme Court justices, have recently filed dissents urging the court to reconsider the Sullivan standard.

The heart of the controversy is a disagreement over how much leeway the media should be given to make mistakes before being held legally liable for publishing them.

As per Yahoo, critics of the existing norm argue that it gives much too much latitude in a digital era where publish times are measured in seconds, and the concept of what a news outlet is pushed to its limits. The internet, according to Gorsuch, has turned the 1964 Sullivan standard “into an ironclad subsidy for the publication of falsehoods by means and on a scale previously unimaginable.”

Though Trump is likely the most vocal opponent of the high standards of libel laws, dissatisfaction is not limited to Republicans. On Twitter late last month, prominent Democratic lawyer Mark Elias argued that the Sullivan verdict was based on the assumption that the media was “pro-democracy,” a role that “the mainstream press seems increasingly disinterested in playing,” he wrote. Even some members of the media say that, while press freedom is crucial, current laws give negative actors too much of a legal edge. Broad press rights, according to supporters of the Sullivan standard, are essential for any country that expects its media to hold powerful people accountable. They warn that without that safeguard, inadvertent errors may cost news organizations their jobs.

They say that a press that is afraid to make any mistakes will be too timid to serve the needs of the American people.

Any efforts to use Palin’s case to compel the Supreme Court to reconsider the media laws will have to wait until the current trial concludes. If her attorneys file an appeal, it’s unclear whether there will be enough justices ready to hear the case, much less overturn the Sullivan standard.

“The media should obviously be held accountable for mistakes in their reporting. However, creating an environment in which news outlets are afraid to report on powerful people because they’re worried about being sued is obviously not a good thing for democracy.” — Arwa Mahdawi, The Guardian.

The end of Sullivan would mean less accountability for the powerful

“Powerful institutions are held to account by a powerful press. Without Times v. Sullivan, news organizations are likely to shy away from investigative reporting for fear of losing libel cases because of carelessness or unavoidable mistakes.” — Dan Kennedy, WGBH

Conservatives should want existing laws to remain in place too

“Times v. Palin, it’s really two Americas. You have this mainstream institution vs. this kind of anti-media figure. This is why it’s going to be a doozy of a case. I’m sure it’s going to be heavily covered on Fox News, but there could be a backfire effect. … Outlets like Fox do rely on Times v. Sullivan.” — Brian Stelter, CNN

It’s unreasonable to expect the press to always be perfect

“Journalists, being human, inevitably make mistakes; those mistakes should be acknowledged and corrected but, at least when public figures are involved, not harshly punished.” — Margaret Sullivan, Washington Post

Individuals, not big media companies, have the most to lose if Sullivan is overturned

“The Sullivan decision is often seen as a boon to big corporate media. But reversing it would raise the threat of libel judgments against millions of people on social media and websites — most of whom lack the resources to fight court battles. Someone who posts a falsehood about a member of Congress on Facebook could be hauled into the dock and reduced to financial ruin.” — Steve Chapman, Pittsburgh Post-Gazette

The laws should be changed

“As every recovering addict knows, the first step toward getting better is admitting that you have a problem. And the New York Times has a problem. The Times may not have any love for Sarah Palin, nor she for it, but the former governor is doing the newspaper a favor by giving it the opportunity to recommit itself to fundamental journalistic values, one of which is not making stuff up about people you hate simply because it is fun and profitable to hurt them.” — Kevin D. Williamson, National Review

“The survival of a free press depends in part on the First Amendment. But in the long run, it also requires support from a public that wants it to be free. A press that violates its privileges with impunity, born of legal protection from a dubious constitutional interpretation, is more vulnerable than righteous journalists think.” — Editorial, Wall Street Journal

“Is the media ready to admit (if not in open court, then at least to themselves) that the wording in the Sullivan decision was never a great fit for editorials, columns, and other forms of opinion writing?” — Ruben Navarrette Jr., Daily Beast

“Palin’s suit gives us an opportunity to ask whether the old standard still makes sense in our current world. … The huge difference between 1964 and 2022 when it comes to the continued viability of our defamation law standard is, of course, the internet. Information, misinformation, and disinformation now bounce around our online universe with a speed unimaginable to the justices who wrote the Sullivan decision.” — Jessica Levinson, NBC News