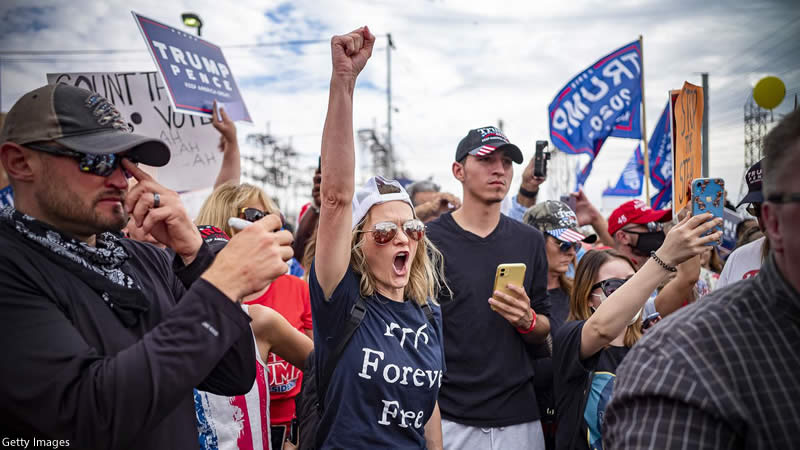 According to new research published in the Journal of Social Psychological and Personality Science, Trump supporters are more simple-minded and happier than Biden supporters. A text analysis of written narratives from US citizens revealed that Donald Trump supporters used more positive, less cognitively complex language that suggested a simplistic and categorical way of thinking.

Conservatives, according to evidence from the field of political psychology, are more simple-minded than liberals. However, recent research has suggested that rigid and categorical thinking can be found at both ends of the political spectrum. Jo Ann A. Abe, a researcher, set out to investigate the link between political orientation and cognitive-affective style by analyzing the psycholinguistic patterns of US citizens.

Abe gathered written narratives from a demographically diverse sample of 1,518 men and women who shared their viewpoints on the upcoming 2020 United States Presidential Election.

Participants in the same survey also indicated which candidate they planned to vote for in the election (Biden, Trump, someone else, undecided, or not voting), as well as their level of enthusiasm for their preferred candidate. They also used the Ten-Item Personality Inventory to rate their own personality as well as the personalities of the two presidential nominees.

The study‘s author then examined the participants’ narratives using three computerized text analysis programs. The Linguistic Inquiry and Word Count (LIWC) method was used to score the texts based on psychological categories such as categorical thinking.

According to the findings, Trump supporters who are extremely enthusiastic scored the highest on categorical thinking and the lowest on complexity. In addition, they used more positive affective language than less enthusiastic Trump and Biden supporters.

This suggests that a person’s devotion to a particular candidate may cloud their ability to think critically.

According to Abe, a 2021 study conducted by Lee Drutman found that devotion to Trump was associated with support for the “Stop the Steal” campaign.

“A future study might examine whether extremely enthusiastic supporters, who rate their preferred candidate highly on trustworthiness/integrity, and use simple and categorical language are especially susceptible to falling prey to such false beliefs,” Abe writes.

Overall, the findings support the hypothesis that conservatives think more strictly than liberals, while also supporting the theory that political extremists think more narrowly than moderates.

However, there is some gap between these findings and the findings of previous studies, implying that language use varies greatly depending on the context (e.g., a narrative written for a study versus a tweet composed for a Twitter audience).

“Although the results of this study are broadly consistent with the view that conservatives may be more simple-minded and happier than liberals,” Abe says, “these findings need to be replicated using the same methodology and different sets of candidates during another election to demonstrate their generalizability.”

The study, “Cognitive-Affective Styles of Biden and Trump Supporters: An Automated Text Analysis Study”, was authored by Jo Ann A. Abe.