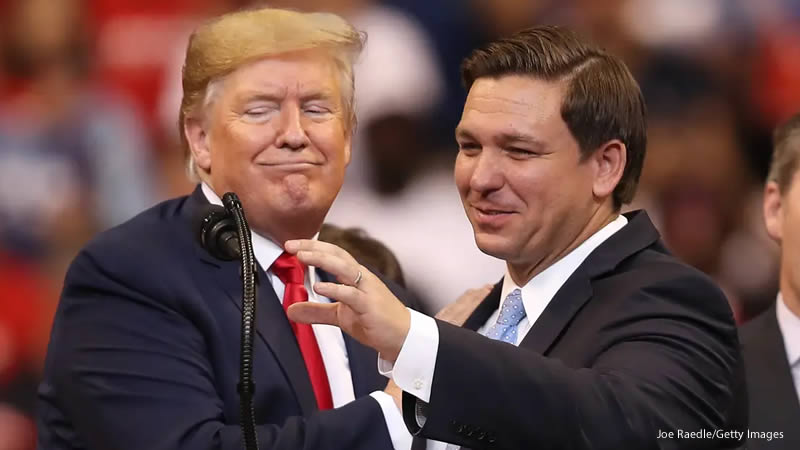 Former President Donald Trump dismissed reports of a growing feud between himself and Florida Gov. Ron DeSantis, saying the governor and he has a “very good relationship.”

“I think Ron said last week publicly, ‘The press is never going to get in the middle of my friendship with Donald Trump. We are not going to do that stuff,’” Trump told Fox News. “He said it very strongly. I thought that was very interesting and very nice. He said that, and I agree 100%. I have a very good relationship with Ron and intend to for a long time.”

Trump added that there has been “absolutely” no bickering between himself and DeSantis and that DeSantis has done “a terrific job” as governor.

According to an Axios report last week, Trump has been complaining about DeSantis to his close allies, calling the governor “dull” and inquiring why he hasn’t ruled out a 2024 run.

Both DeSantis and Trump are considered frontrunners for the presidency in 2024, though neither has formally declared his intention to run.

Trump’s former chief of staff, Mark Meadows, stated this week that DeSantis will not run against Trump if he chooses to run.

“This is the party of Trump. This will continue to be,” he said. “It’s [Trump’s] decision on whether he runs for president or not, but I can tell you, if he does, it won’t be Ron DeSantis challenging him. It will be the media trying to create this conflict that obviously is not there.”

DeSantis also dismissed the rumors of a feud with Trump, calling them clickbait.

“I think this is what the media does,” DeSantis said during a recent interview.

“You cannot fall for the bait … You know what they’re trying to do, so just don’t take it. Just keep on keeping on,” he continued.

“We need everybody united for a big red wave in 2022,” DeSantis said. “We’ve got to fight the left, and not only fight but beat the left. And that’s what we’re doing in Florida.”

All of Biden’s successes or failures, it’s really about ‘COVID, stupid’
Trump Mocked for an Embarrassing ‘Please Clap’ Moment at his own Resort