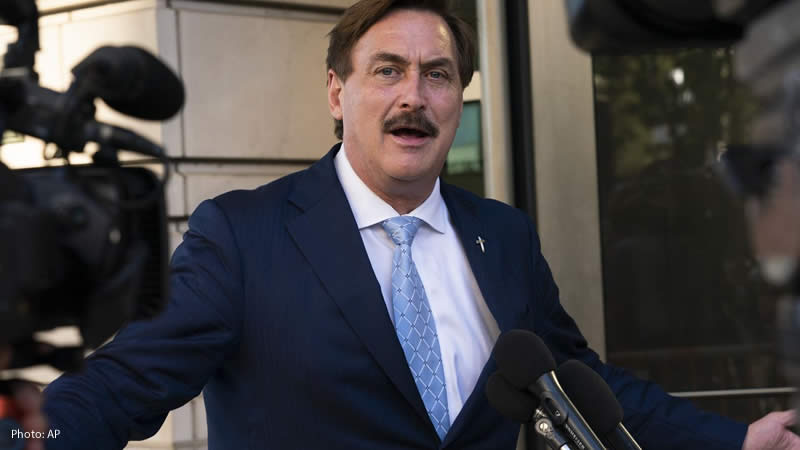 Mike Lindell, the CEO of MyPillow, claims that he has been barred from appearing in many of his company’s commercials.

“I had 12 TV stations just the other day now say that I couldn’t be in the commercials. I cannot personally be in them,” Lindell said during an interview with the Right Side Broadcasting Network (RSBN) on Saturday.

Lindell, a strong supporter of former President Donald Trump, did not name the stations that had prevented him from appearing, but referred to them as “minor networks.”

Lindell explained, “They want my voice stopped.” He went on to say that he had only heard of his appearance ban the day before.

“Believe me, they cancel, they will never get to sell my product again,” he said.

During the interview, Lindell also said that customers who buy his pillow products were in a unique situation because they “were supporting getting rid of” the voting machines “[and] everything we’re doing to save our country,” while also getting a “good product.”

Lindell is clearly a Trump figure. He was most known a few years ago for his campy late-night infomercials to promote his pillows, as well as his often told-the-back story of overcoming crack addiction. He claimed he was uninterested in politics until he met Trump in 2016, bonded with a fellow businessman, and quickly became a vociferous Trump supporter and giver.

Lindell, according to his own estimate, spoke at more than 60 Trump campaign events as a warm-up speaker, receiving many shout-outs from the president and co-chairing Trump’s Minnesota campaign.

Lindell came under fire in August as the coronavirus crisis deepened for promoting the unproven treatment of oleander after investing in a firm that made a compound from it.

Lindell then shared Trump’s refusal to accept Biden as the winner after the election. Twitter labeled many of his claims regarding the outcome as questionable. In December, he sent a tweet, which he later deleted, urging Trump to declare martial law and take ballots and voting machines in seven important states.

MyPillow’s logo was prominently featured on a website that promoted the Jan. 6 Trump rally that preceded the disturbance, despite the fact that he declared he opposed the Capitol insurgency. Lindell has claimed that “antifa” was to be responsible for the incident, despite the fact that authorities say there is no proof of this. He said he’s still hopeful that the United States Supreme Court would restore Trump’s election.

Since Trump’s loss to Biden in the presidential election, Lindell has continued to make false claims of election fraud. MyPillow’s logo was also displayed prominently on TrumpMarch.com, a website that encouraged the Jan. 6 riots in Washington.

Lindell believes he has no regrets about his election claims or his support for Trump, whom he met in 2016.

“I stand for what’s right,” said Lindell, who created the MyPillow in 2004 and built the business in Chaska, Minnesota, southwest of Minneapolis. “I’m standing firm.”

Apart from the retail pressure, Lindell could face a lawsuit from Dominion Voting Systems on his claims that their voting devices were used in election fraud. According to the Washington Post, Dominion sent Lindell a letter earlier this month warning him that legal action would be taken against him.

Lindell said he did his own study into the voting machines and hopes Dominion files its suit soon so that “all the evidence can come out.”