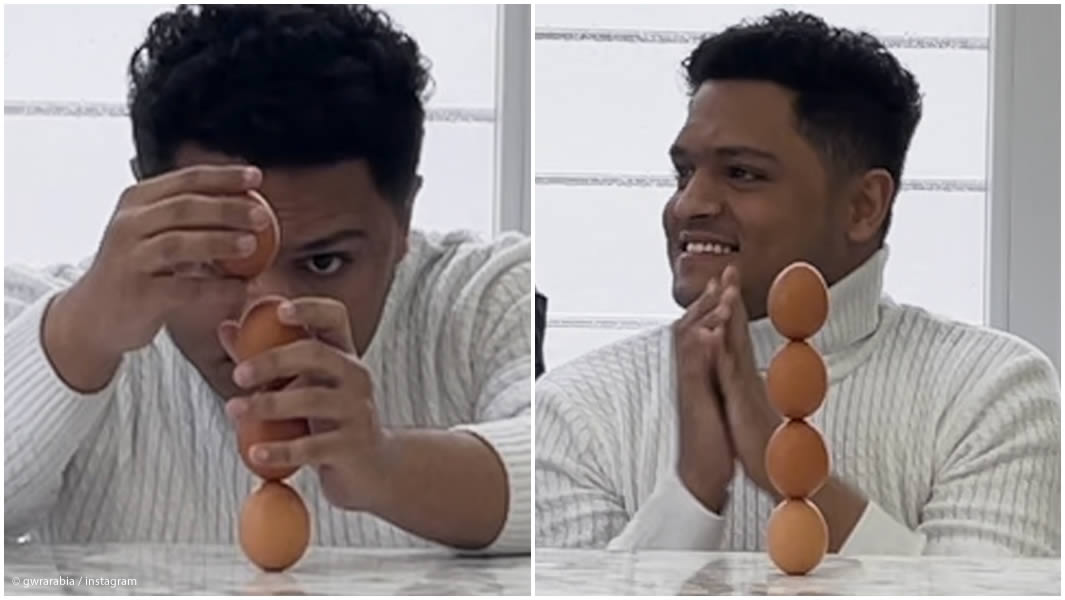 The most challenging part of the attempt, according to the record holder, was determining the center of gravity for each egg due to its distinct shape and texture.

While it may appear to be an easy effort, a Yemen-born man deserves praise for breaking his own Guinness World Record for the highest stack of eggs by balancing four eggs on top of one another. Mohammed Muqbel had previously managed to stack three eggs.

Muqbel aced the feat once again to challenge himself and put his talents to the test.

While the concept may appear simple, breaking a record like this is far more difficult than it appears, according to the Guinness Records website.

“Many around the world fail to realize the hard work associated with balancing. The art of balancing involves tremendous patience, focus, and calmness. I would even say it is linked to the science of physics and engineering,” Muqbel told the records site.

The most challenging part of the attempt, according to the record holder, was determining the center of gravity for each egg due to its distinct shape and texture.

As per Indianexpress, Muqbel first noticed his ability to balance things at a young age and has been perfecting it ever since. In his interview with the records site, Muqbel continued, “I consider myself an ambitious person, and I aim to showcase my skills to the whole world one day.”

• Abolfazl Saber Mokhtari (Iran) holds the record for the most spoons balanced on the body: 85, in Karaj, Iran.
• Nate McEvoy set the record for the most Jenga blocks removed in one minute: 32, on September 9, 2021. Nate had to remove the blocks and place them back on the tower without toppling them for this record.
• Ashrita Furman (USA) at York College in New York, New York, accomplished the most eggs balanced by an individual: 888.
• Maurizio Zavatta (Italy) achieved the longest duration balancing on two balance boards: 21 minutes and 20 seconds in Taoyuan, Taiwan, China.
• David Rush (USA) holds the record for the most chairs balanced on the chin: 15, in Hendersonville, Tennessee, USA.
• The heaviest weight balanced on the head: 188.7 kg (416 lb), achieved by John Evans (UK) who balanced 101 bricks on his head at the BBC Television Centre in London, UK.

Continue Reading
You may also like...
Related Topics:Guinness World Records

Should Parents Take Cell Phones Away from Their Children? 4 Things to Think About
On the premiere of ‘AGT: Extreme,’ wheelchair daredevil had a Scary Wipeout