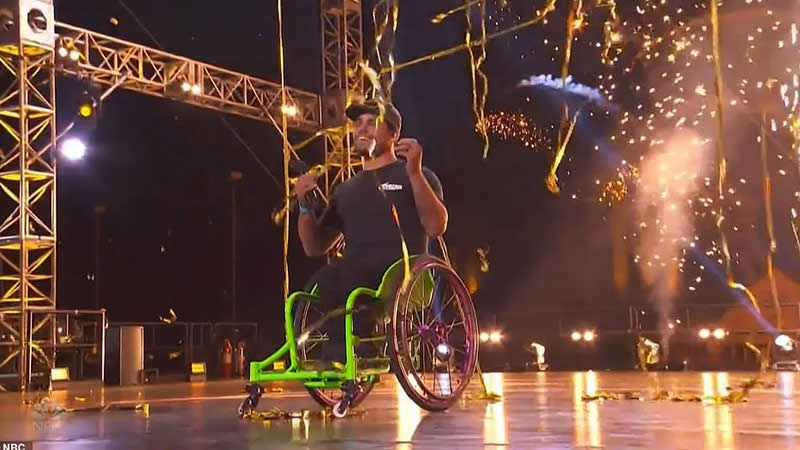 When 29-year-old wheelchair daredevil Aaron Wheelz had a horrific wipeout on America’s Got Talent: Extreme, the new AGT spinoff involving athletes performing the craziest and most epic stunts, the last act had everyone gasping.

Wheelz, who was born with spina bifida, has had 23 surgeries in his life. Fortunately, it hasn’t had any effect on his determination. “Here on America’s Got Talent: Extreme, everyone here is crazy. So for my performance, I’m pulling out all the stops. I’ve put in a lot of hours, a lot of crashes. It feels like I’ve been training my whole life for this. All my life I’ve been proving people wrong and pushing the limits and, so, tonight, that’s exactly what I’m gonna do,” stated Wheelz.

Wheelz claimed to be nervous before his stunt because he doesn’t usually land the jump, which set the tone for the performance. Then, when he went down the lower half of the ramp after the jump, Wheelz over-rotated and landed flat on his face. Wheelz continued to skid until he was able to carefully pick himself up, much to the delight of the judges and audience.

What’s more shocking is that, while most people would call it a day after that experience, Wheelz insisted on repeating the jump to get it right, despite the fact that judge Simon Cowell told him it wasn’t necessary.

“Are you sure,” asked Cowell. “Because for us, that was enough. Trust me.”

“No, I gotta get it. You know, come this far,” said Wheelz, who also explained, “I think I’m good to do this. The first one tells you what you did wrong.” With everyone on the edge of their seats, Wheelz took the jump again but, this time stuck the landing.

“I actually feel sick,” said Cowell, who was incredibly relieved.

Back on the deliberation stage, Cowell shared, “I thought it was amazing, and you didn’t think it was good enough. Then you come back up again. Then you do it twice. You define, I think, why we made this show if you want my honest opinion. You know, this is what we were looking for. I think you are an amazing person. Got every chance of winning this, you know that.”

However, the person who was most impressed was judge Nikki Bella, who shared, “Your life is so aspirational. I mean, you are the definition of never giving up. I think it’s absolutely incredible. When I think of an AGT: Extreme champion, I think of someone who pushes their limits, and I just can’t wait to see what you get to do next, Wheelz, because you’re going to the finals.” Bella then stood up and slammed her hand down on the Golden Buzzer.

“You’re incredible. You made me feel emotional. You make me feel emotional now. Like, oh, my gosh, I’m gonna cry. You’re just gonna touch the world. You’re gonna do a lot of great things. You already are. So I’m so honored to give you my Golden Buzzer,” stated Bella.

KYLIE MAR: The final act during the premiere of “America’s Got Talent Extreme” the new AGT spinoff about athletes doing the craziest and most epic stunts, had everyone gasping when 29-year-old wheelchair daredevil Aaron Wheelz suffered a horrifying and painful wipeout.

KYLIE MAR: And while most people would call it a day after that experience, Wheelz insisted on doing the jump one more time to get it right, despite the fact that judge Simon Cowell told him it was absolutely not necessary.

SIMON COWELL: Are you sure?

SIMON COWELL: Because for us that was enough, trust me.

SIMON COWELL: Are you sure?

KYLIE MAR: With everyone on the edge of their seats, Wheelz took the jump again, but this time stuck the landing.

TERRY CREWS: He did it!

KYLIE MAR: Viewers at home took to social media following Wheelz’s jump celebrating the stunt man, like this person who tweeted, “That is how you close out an extreme show right there well done, Wheelz!” While others were emotional after seeing him triumph.

TERRY CREWS: Oh, Simon, how do you feel right now?

NIKKI BELLA: That was emotional.

SIMON COWELL: It was emotional.

SIMON COWELL: I’ve got to be honest with you, Travis, I think you guys are nuts.

KYLIE MAR: But the person who was most impressed was Judge Nikki Bella, who was so inspired by Wheelz’s determination that she gave him her golden buzzer.

(SINGING) I am here.

TERRY CREWS: Wheelz, you just got the golden buzzer from Nikki Bella!

Watch: Yemeni Man Breaks His Own Guinness Record By Stacking Four Eggs On Top Of One Another
Ukrainian Minister says World’s Largest Cargo Plane was Destroyed during a Russian Airfield Attack