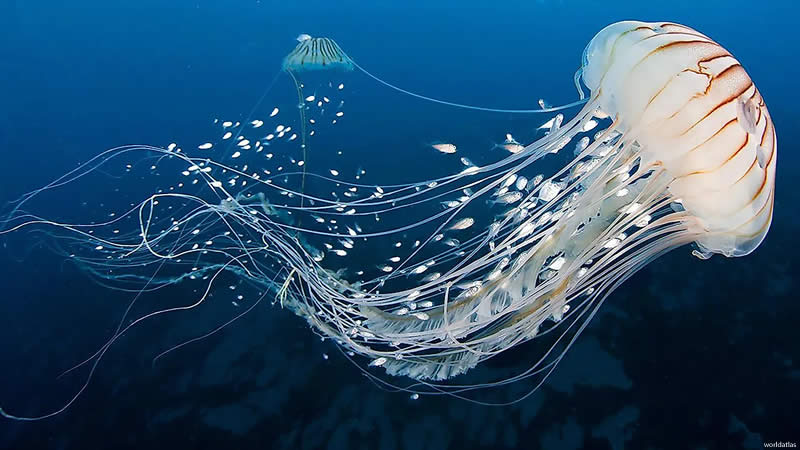 Auroralumina attenboroughii was an ancient animal that lived between 557 million and 562 million years ago.

According to a recent study, the current jellyfish are related to Auroralumina attenboroughii, the earliest known living animal relative.

The specimen, which is named after the renowned naturalist Sir David Attenborough, directly rejected the notion that animal body designs were developed during the Cambrian boom.

According to Big Think, the Auroralumina attenboroughii specimen is around the size of a typical toothbrush, or 20 cm long.

Two different stalks that broke off from a preserved section make up the specimen.

Each stalk is covered with a dense crown of long, overlapping structures known as tentacles by scientists.

When examining what may happen if a three-dimensional organism were placed onto a two-dimensional surface, the researchers considered the specimen.

After adjusting for this, the researchers came to the conclusion that the left and right stalks were identical.

The specimen was therefore most likely tetraradial, or symmetrical around four corners that radiate from the center.

The current jellyfish have this trait.

The specimen is maintained in a lateral view, making it difficult for researchers to study the arrangement of the crown or the components within it.

They found that these projections most closely resemble the tentacles of live organisms, but instead of remaining as separate tentacles, they appear to be one larger, composite structure.

Finally, based on the variations in the fossil’s preservation, the researchers came to the conclusion that the stalk and crown were made of distinct materials.

Compared to the hard stalks, the crown was much more fragile and made of softer tissue.

The scientists created a cast of the fossil from which they created a computer model of the monster that allowed them to study it under various lighting conditions.

They then used its physical features to place it on a phylogenetic tree.

The study shows that Auroralumina attenboroughii belongs to the medusozoan stem group of cnidarians.

Cnidarian and Its New Fossil

According to Nature Ecology & Evolution, cnidarians are a diverse and ancient phylum that comprises corals and jellyfish and dwells in both the benthic and pelagic zones.

Cnidarians split from other animals in the Precambrian period, but it is debatable whether they existed during the Ediacaran era (635–542 million years ago).

Their rich fossil record from the Phanerozoic eon provides insight into the group’s early history.

Auroralumina showed the growth of the crown group of an animal phylum as well as the fixation of its body plan tens of millions of years before the Cambrian diversification of animal life.

Study finds Connection of Diseases with Climate
Viral Video: Crocodile Drags Man Deep Into Water after Killing Him in India