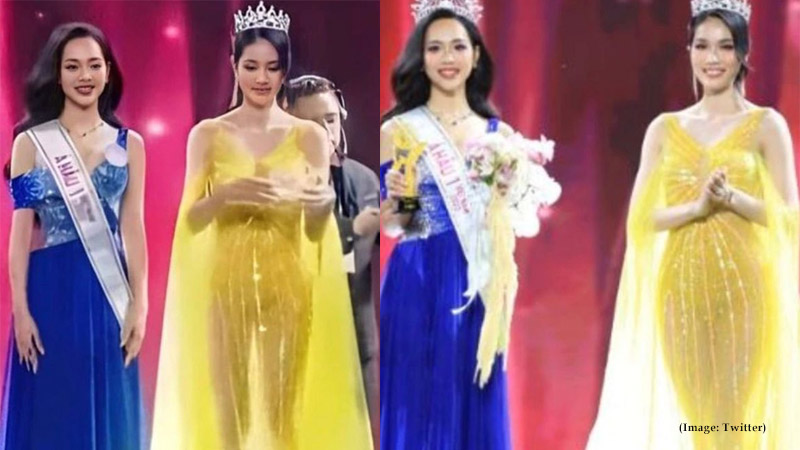 An angry audience criticized a beauty queen for wearing a “see-through” dress on stage. The organizers of the 2022 Miss Vietnam beauty pageant were obliged to apologize following a controversy over a contestant’s translucent gown.

Phuong Anh, a model, was seen wearing a “flimsy” yellow dress with incredibly translucent fabric that revealed her body below. The 24-year-old had been on stage to award the first runner-up trophy to Trinh Thuy Linh.

Phuong, who finished first in the 2020 competition, claimed she was “ashamed” of her dress and had “learned a lesson” in her design choices. The event’s organizers apologized to outraged fans for the controversial dress.

“It’s very unfortunate that an incident happened to the outfit of runner-up Pham Ngoc Phuong Anh,” they said, in a statement shared by VnExpress. “The dress when seen from certain angles created an unflattering image on stage.

“The organizers of the 2022 Miss Vietnam apologize to the audience and fans for not having anticipated and being unable to prevent the incident beforehand.” Pham Kim Dung, the deputy head of the organizing committee, stated that the clothing worn on stage is generally extremely carefully picked before the event.

However, she stated that on this particular occasion, not all of the lights were turned on during the rehearsal, implying that they apparently saw no problems with the dress. Social media channels were flooded with comments from angry viewers who were upset over the outfit, while others came to Phuong Anh’s defense.

“The ridiculous profanity leading to the cultural repulsion of the Miss Vietnam contest,” one Twitter user wrote. “This outfit is not appropriate even for a beauty contest,” another said on Facebook. “It does not look good on television. She should be more careful next time.”

“She wore a bodysuit underneath, not underwear, and so I do not see anything inappropriate here,” one posted. “People are overreacting. I think the organizers are also to blame for this incident. They have a team for monitoring the outfits and still let this happen.”

Earlier this year, the iconic Miss Universe beauty competition experienced some game-changing new changes. The tournament has increased its eligibility requirements to include married women and moms to compete for the first time in its history.

For the first time, the historic changes will be implemented in the 2023 competition. The present 70-year-old law allows only unmarried women between the ages of 18 and 28, who have never been married or had children, to apply.

A source close to the organization confirmed to Insider that the age range will stay the same. “We all believe that women should have agency over their lives and that a human’s personal decisions should not be a barrier to their success,” an internal memo seen by The National said.

Mum finds ‘missing’ son in chimney after he went to find Santa: “His sister tried to follow him”
Omicron Subvariant XBB 1.5: “The more this virus circulates, the more opportunities it has to mutate”