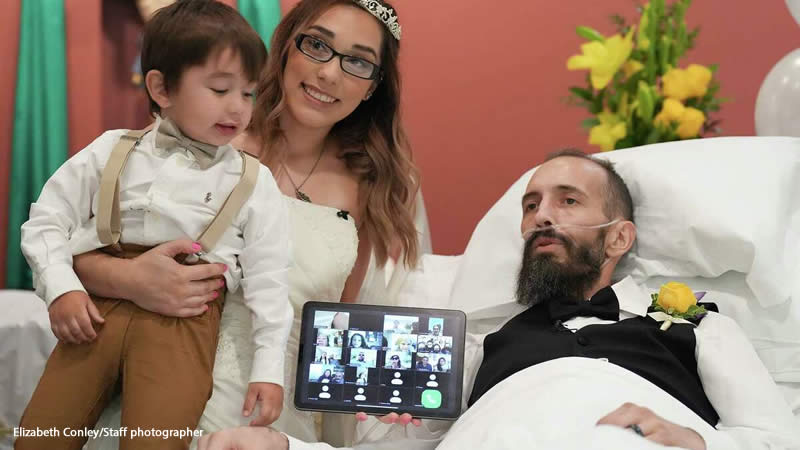 Thanks to some quick planning, the staff at Baylor St. Luke’s Medical Center helped fulfill Noah Lathrop’s wish to marry his fiancée.

When doctors told Noah Lathrop he only had a few days to live, he expressed one last wish: he wanted to marry his fiancée.

Noah exchanged vows from his hospital bed, which had been moved to the chapel for the occasion, dressed in a tuxedo with a boutonniere on his lapel. Throughout the ceremony, his stare never left his bride, who was in her wedding dress, and the couple’s 3-year-old son, Aries.

The bride was overcome with emotion as she said her vows, promising to love her husband in sickness and in health. Her eyes gleamed up with tears as they kissed, fulfilling her husband’s wish.

“It means a lot,” said Noah, 40, who proposed earlier this year while undergoing chemotherapy. “We got a chance to get married, which I didn’t think was going to happen in time.”

Jade wore a strapless white gown and tiara in a hospital room that had been converted into a bridal suite. She was holding Aries while her hair was curled and makeup was applied.

The wedding was attended by a dozen Baylor St. Luke’s Medical Center staff. 30 of the newlyweds’ family and friends from California, Oregon, and Utah were also able to attend via Zoom videoconference.

Noah’s prognosis meant that the wedding had to be planned quickly, according to Dr. Charu Agrawal, the director of cancer palliative care services at Baylor St. Luke’s Medical Center. Noah made the request on Monday afternoon, and Agrawal set out to fulfill it on Tuesday morning.

Agrawal sent an email to her colleagues, who quickly found everything they needed for the ceremony. Wedding cakes were donated by H.E.B. and the American Cancer Society, a tuxedo was donated by Men’s Warehouse, and the dress was donated by a couple who used to own a bridal shop. They also found a pianist, a makeup artist, and an artist who painted a portrait of the couple during the wedding.

Agrawal also worked with Jade, who applied for the marriage license and was granted a waiver for the typical three-day waiting period in Texas.

“They had really talked about getting married for so long. They just thought they had more time,” Agrawal said. “I hope this is something she can feel really good about, that they sealed that commitment to each other.”