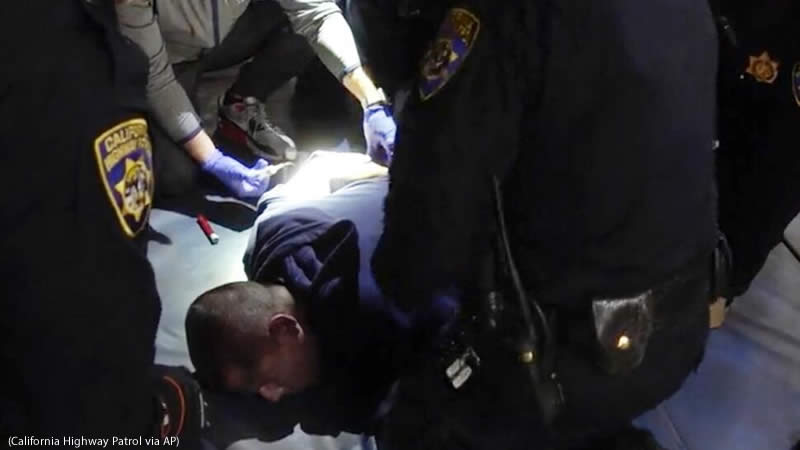 A Southern California man died nearly two years ago as he shouted “I can’t breathe” while being held by multiple officers as they tried to take a blood sample, according to records and a video, California Highway Patrol officers arrested Edward Bronstein, 38, after a traffic check on March 31, 2020. Bronstein died fewer than two months before George Floyd, who, like Bronstein, was killed by police in Minneapolis after telling officers repeatedly, “I can’t breathe.”

Following a judge’s order, a nearly 18-minute video taken by a CHP sergeant at the Altadena station was made public on Tuesday. Bronstein’s family has sued the officers in federal court, alleging excessive force and a violation of his civil rights. The family also wants the Los Angeles County district attorney to file criminal charges against the officers.

The LA County coroner’s office ruled Bronstein’s cause of death as “acute methamphetamine intoxication during restraint by law enforcement.” A copy of the autopsy report was not immediately available.

“When the nation was in an uproar over the George Floyd tragedy, we had no idea this had also happened to Mr. Bronstein,” said Luis Carrillo, an attorney for Bronstein’s family.

A spokesperson for the LA County District Attorney’s Office said: “the matter remains under review.”

“In my view the officers demonstrated a callous disregard for the value of human life and their actions should be investigated as potentially being criminal conduct,” said Bowling Green State University criminal justice Professor Philip Stinson, who studies police behavior and misconduct.

In the federal case, the state attorney general’s office is representing the highway patrol and the officers, and media inquiries have been referred to CHP. CHP spokesperson Officer Shanelle Gonzalez said the agency is unable to comment on the case due to pending litigation.

In September 2021, Governor Gavin Newsom signed the bill barring police from employing particular face-down holds that have resulted in several accidental deaths. After Bronstein’s death, the law was approved to expand on the state’s ban on chokeholds, which was enacted in the aftermath of Floyd’s murder.

Stinson said the dangers are well known, but in this case the officers had a mat prepared, making it seem “like this was a routine occurrence for the officers, that they would take someone to the mat face down to gain compliance in order to get what they want.”

Moreover, their comments on camera seemed to indicate that they were of a mind “to teach somebody a lesson: ‘Well, if you’re not going to comply with what we want you to do, we’re going to do this the hard way and it’s going to be painful for you,’” said Stinson, who reviewed the video at the request of The Associated Press.

Finally, Stinson said, “It seemed that they were treating the incident as if the man was pretending to be unconscious. It did not seem to register with the officers that there was a medical emergency for many, many minutes.”

Bronstein was afraid of needles, according to family members, which is why he initially refused to cooperate with the CHP when they tried to take a blood sample. In the video, one officer tells Bronstein that they have a court order, which Carrillo disputes.

An officer tells Bronstein to take a seat for the sample: “This is your last opportunity. Otherwise, you’re going face down on the mat and we’re gonna keep on going.”

One officer replies: “It’s too late.”

Bronstein begins screaming “I can’t breathe!” and “I can’t!” before the blood is taken, shouting it about eight times and pleading for help as the officers continue to restrain him on the ground.

“Stop yelling!” an officer yells back.

Eugene O’Donnell, a professor of police studies at John Jay College of Criminal Justice, didn’t blame the officers but said that due to public outrage, police agencies must make it clear that such encounters are only permitted in extreme circumstances.

“This is just an utterly explosive potential situation,” said O’Donnell, who also reviewed the video at the AP’s request. “If they’re not compliant, no longer can the police be having these wrestling matches with people because the consequences are deemed too far out-risk any benefit.”

Bronstein’s shouts become softer, and he eventually stops screaming. Despite his unable to respond, a medical professional continues to draw blood while the officers restrain him.

He may not have a pulse and does not appear to be breathing, according to the doctors. “Edward, wake up,” the officers and the medical expert slap Bronstein in the face.

They start CPR more than 11 minutes after Bronstein’s last screams.

Nine officers and one sergeant are named in the lawsuit.

The medical professional’s employer, according to his attorney, was “heartbroken” to learn of his death.

According to Attorney John C. Kelly, the company does not assist in the arrest or physical handling of anyone and only takes blood samples for testing. They aren’t there to give medical clearance or evaluation, and the majority of them aren’t trained to do so.

In this example, he said, the company’s employee “provided what help he could under the circumstances” after Bronstein became unresponsive.

The police’ and paramedics’ unsuccessful attempts to revive Bronstein are shown in a second video that lasts more than 12 minutes.

One officer tells the paramedics that Bronstein had been complaining of “shortness of breath.”

“When we rolled him back over, he was turning blue,” he said.

Soon after, someone reminds the group: “Everybody’s on camera.”

The student threw a Chair at a Substitute teacher in Texas, he was Left with Bleeding Face: Watch Video
Gabby Petito’s Family in Contact with Politicians… To Locate Missing People