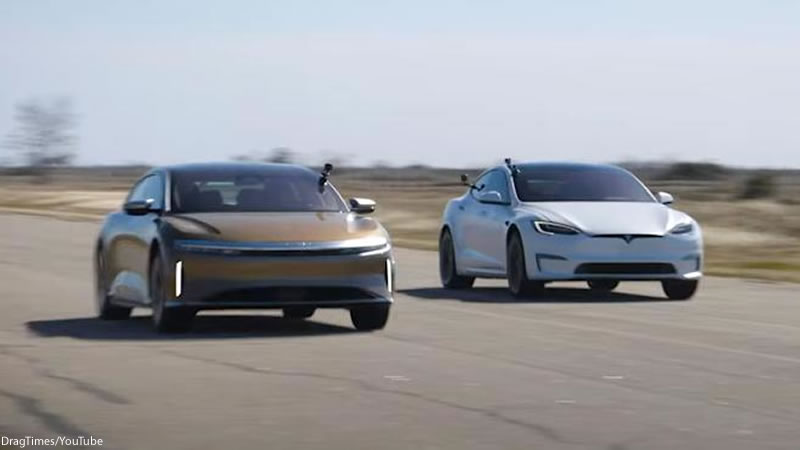 Now that the Lucid Air is a practical reality, one question remains: how does it compare to Tesla’s Model S Plaid, another well-known electric luxury sedan? You now have a greater understanding of the situation. DragTimes has shared long-awaited footage of a quarter-mile race between the Air and the Model S Plaid, and the result is both predictable and instructive.

Three of the four runs, including one with a rolling start, are won by the Model S Plaid, which comes as no surprise. It claims a faster 0-60MPH time (1.99 seconds versus 2.5), and its lighter curb weight (4,828lbs versus about 5,200lbs) helps offset the horsepower deficit.

The Tesla’s drag strip prep mode was also turned off. If you have the opportunity to compare these EVs, the Model S is still your best bet for raw acceleration.

The Lucid Air, on the other hand, holds up admirably and even wins a race when the Model S Plaid’s launch mode is turned off. To put it another way, if you’re more interested in green light races (where a launch mode is unlikely to be an option) than drag strips, that extra power still matters. You can preheat the Air for greater straight-line performance, and it’s currently focused more on “luxury and efficiency” than speed, according to Lucid.

As per Yahoo, with rather chilly temperatures for the Houston-area strip and strong winds, the conditions weren’t ideal. You’ll almost certainly see faster times somewhere else. Nonetheless, the video is worth seeing since it provides a rare opportunity to evaluate how different electric car platforms perform in real situations. It also demonstrates how far EVs have come – these are figures you’d associate with higher-end supercars, not four-door people carriers.