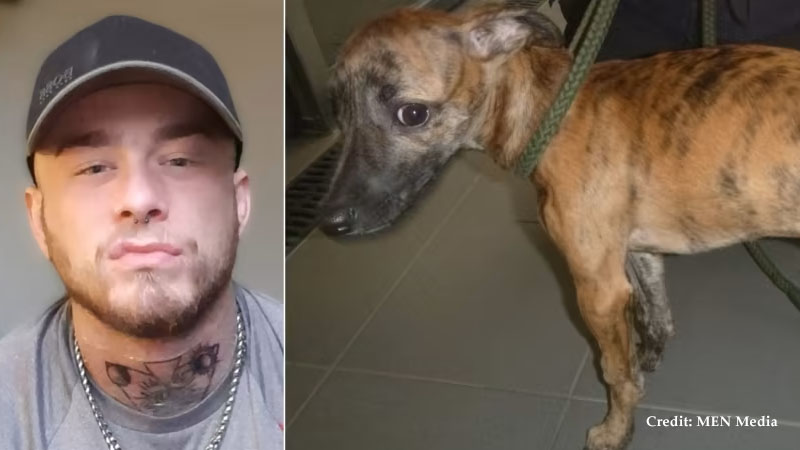 Jake Atkin has been told he will not be able to own or look after any animal for at least five years. After a puppy urinated on his leg, a Hull man beat it senselessly and threatened to “kill it.”

Jake Atkin, 24, had previously taken his eight-week-old whippet Blaze to the vet twice for an injury after the puppy “walked into a door” and then for eating chocolate by accident.

However, just four weeks after receiving Blaze, Atkin erupted in a rage while on the phone with a friend because Blaze had urinated on his leg. According to Hull Magistrates Court, the puppy was left unconscious and could have died.

Atkin, of Pitt Street, west Hull, previously admitted causing unnecessary suffering to a protected animal and stood before judges for sentencing on Monday. Prosecuting on behalf of the RSPCA, Philip Brown, told the court what happened on November 27, last year, according to Hull Daily Mail reported.

He said: “That day a friend of the defendant returned Blaze to him after looking after him for a while. Later she called him and they were talking and then the phone went dead.

“She called him back and he was in an exceptionally agitated state because he said ‘the dog had p****d on his leg. She lost contact again and when she got hold of him again he was still very angry and told her that if she did not collect the puppy he would ‘kill it’.

“She went over to the defendant’s home as quickly as possible. She found the puppy unconscious and he was taken to the PDSA. The vet examined him and found he had life-threatening injuries and he remained unconscious until the next day.

“The injuries included blood to his right eye and extensive swelling to his head. The vet concluded the injuries were not caused accidentally but by blunt force trauma.”

Fortunately, Blaze survived, but due to his young age, it is not clear whether the injuries he sustained would have a long-term impact.

Mr. Brown said: “Blaze has been rehomed and is recovering from his ordeal. This was a serious situation and he suffered significant pain.

“The defendant said he had a blackout and could not explain how the animal came by its injuries. It is clear he lost all self-control. He suffers from bipolar and was taking steroids which led to his anger issues.”

In mitigation, Ben Hibbert urged magistrates to accept the pre-sentence report’s recommendation of a community sentence. He stated that his client was not opposed to a ban on dog ownership, which he admitted was “too much to take on.” However, Mr. Hibbert stated that his client may desire to possess a reptile in the future and requested that the restriction not apply to all animals.

The magistrates issued a 12-month community order with a six-month mental health treatment requirement on Atkin. He was also barred from having any animal for at least five years. He was also fined £400 in costs and a £95 surcharge.

Six People Charged In Cleveland for Torture-Killing Of Woman: A Revenge For Previous Killing
Can Another Stimulus Check Fix The Soaring Inflation Rate?