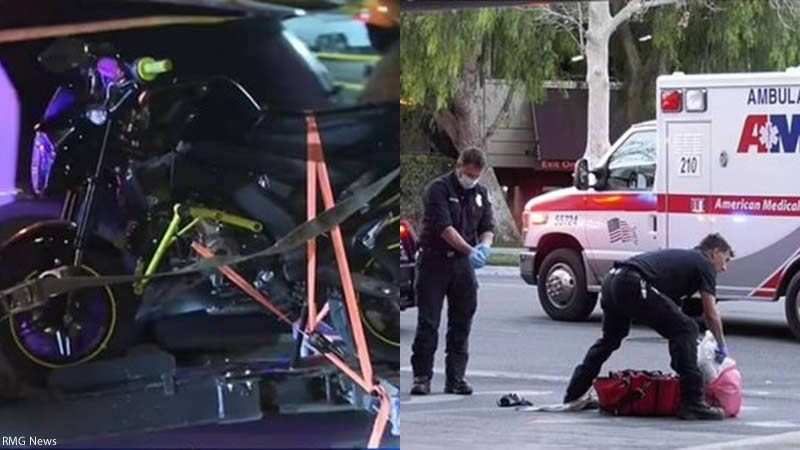 After slipping on the handlebars of her motorbike while performing stunts, a young woman died on the roof of a shopping center.

Friends have identified Maribel Espitia, of California, as the motorbike stuntwoman who died in Valencia, according to KHTS AM 1220.

Because they have been unable to contact Espitia’s family, the Los Angeles County Medical Examiner-Department coroners have yet to officially establish his identity.

Espitia either couldn’t break or lost control before smashing into the garage wall in the Santa Clarita parking lot, according to police.

Workers at the mall claimed the garage was a popular spot for bikers to perform stunts and “doughnuts.”

Before Espitia died, two men and two women had performed tricks on their motorbikes, leaving skid marks on the parking lot’s floor.

As per Canadaexpressnews, Espitia’s funeral will take place at Infinity in Valencia, where she worked as a receptionist, according to KHTS.

A GoFundMe page was started by close friend Destiny Gonzalez, who dedicated the page to Espitia, writing, “My best friend Maribel Espitia had a tragic accident and lost her life.”

She further said: “Anyone who knew or met Maribel knew that she was an exceptional person who you only meet once in a lifetime.

“Words themselves cannot even describe how pure and generous she was, she left us far too soon. Anything that can be donated to help with her funeral costs or other expenses would be greatly appreciated.”

Espitia was treated at the site and later died in hospital, according to the sheriff’s department, which described the death as a “tragic accident.”

Imogen Tothill: Body Found In Wooded Area By Police Searching For Missing 17-Year-Old Girl
Should Parents Take Cell Phones Away from Their Children? 4 Things to Think About