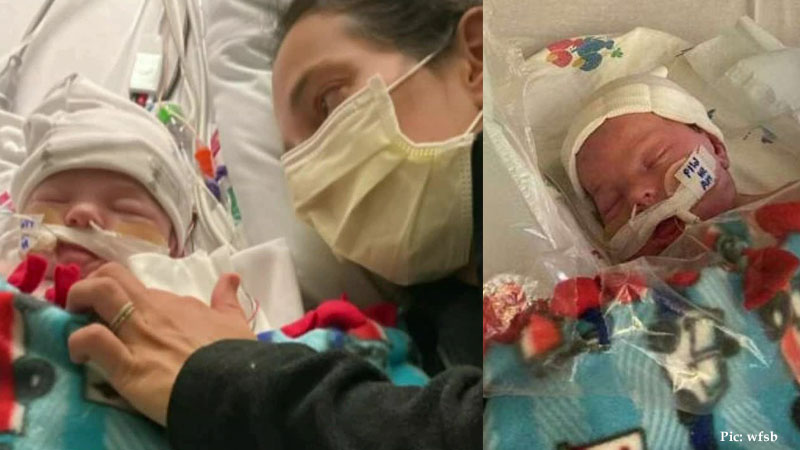 The baby’s parents became aware of a problem a week after the baby was born. The boy, who was delivered at full term and in good condition, wasn’t eating and had redness on his chest, according to his mother. According to reports, the newborn boy had a sister who was 2 years old when he returned home.

He was transported to the children’s hospital with seizures ten days later. Sadly, as soon as they arrived, the newborn baby’s breathing stopped. He was promptly intubated, put on a ventilator, and put into a medically induced coma as the NICU staff worked to figure out what was wrong with him.

Ronan was a happy and healthy baby when he was born, according to Katherine and her husband Mitchell DeLancy. Sadly, the baby’s mother became aware of a problem when he was only one week old. On May 21st, Ronan was born.

His parents observed that he was upset and crying a lot on June 2. Ronan reportedly wept for two or three hours, but Kat—a healthcare expert and clinical dietitian who works with diabetic patients—also observed that he had a red chest that didn’t resemble a rash and no fever, per reports.

She took him in the following day after calling the pediatrician to confirm his condition. According to reports, the doctors suggested the newborn had gas after giving him a thorough exam. The child stopped eating that night after she brought him home. Once at the hospital, the parents were informed by the staff that the baby’s oxygen levels were low. Ronan soon started having seizures.

Katherine Delancy reportedly told NBC Connecticut: “At that point in time, they continued doing testing to try and figure out what it was, and all of the viral markers came back negative. So, they were like, ‘well, we don’t think that he has a virus because everything that we’ve tested has come back negative.’

And then, they finally found parechovirus in his system, after doing multiple tests and doing a lumbar puncture, they found it in his cerebrospinal fluid.”

The doctors informed the parents that they think the human parechovirus (HPeV), a relatively entirely unknown virus that can be deadly to newborns, was the cause of this after conducting a plethora of blood tests, genetic profiles, lumbar punctures, CAT scans, and MRIs.

In Ronan’s instance, the virus targeted his brain, causing encephalomalacia, which implies that a significant portion of his brain’s white matter has been destroyed.

The infant allegedly spent close to three weeks in the hospital battling the parachute virus and the results of severe brain damage brought on by repeated seizures, according to the parents. Sadly, the infant passed away at 34 days old.

According to WAFF, YNHH recently issued a newsletter warning other healthcare practitioners about the virus, stating that it might go undiagnosed because of ignorance.

Ronan’s mother is now trying to raise awareness about the Human Parechovirus. “This virus stole my son from me and I plan to do anything in my power to stop that from happening to anyone else. People are listening and learning. I’ve had people reach out to me from the other side of the country after hearing Ronan’s story. That’s thanks to everyone helping me to share it. I could not have done that alone.

The first step is awareness, the next step is action. We have plans to make every pediatrician’s office in Connecticut get information on the signs to look for this virus and hopefully down the line have PCR testing available for any sick newborn visit. I think if maybe that was an option for Ronan when I brought him in, maybe things could have been different.

Maybe if the virus was caught sooner, he might be with us today. A long-term goal is to inspire funding to be put towards research for a treatment for this virus. Maybe down the line antivirals can treat it or vaccines can prevent it. I’ve started a website ResearchForRonan.com that I plan to update with information on Parechovirus.

Thank you everyone for being there for us. It means the world to us to know Ronan made an impact on the hearts of everyone and will hopefully continue to impact change to help avoid this devastation for another family,” Katherine DeLancy wrote on the family’s GoFundMe Page.