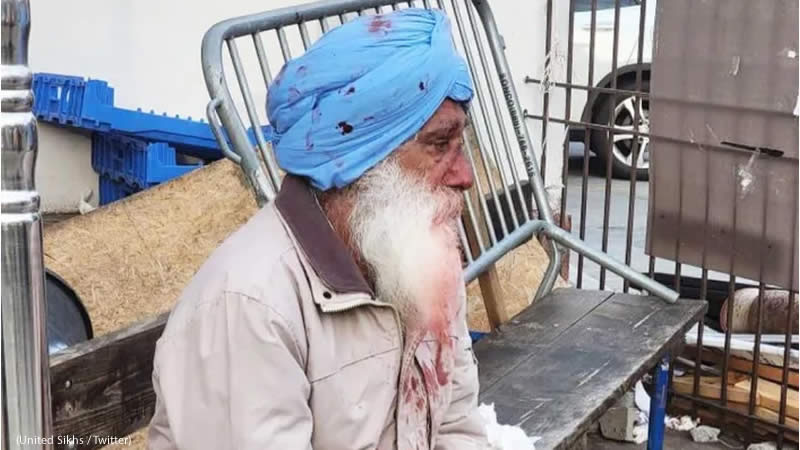 A 70 years old Sikh man coming from India was attacked mercilessly, his face and clothes were running down with blood in an incident being looked into as a possible hate crime. New York city department officials and a Sikh American advocacy group said.

While walking on the road Sikh was attacked by punched in the face around 6:45 am. Sunday

After being attacked Singh fell to the ground after the punch and even the attacker didn’t say any word to him, Police said.

Sikh was carried to the hospital with a screaming voice, fear, with severe nose bleeding and pain. United Sikhs, an international humanitarian organization taking on his case pro-bono, said on Twitter.

Singh had been in Queens for just two weeks, visiting from India, a spokesperson for the Sikh Coalition told NBC News Tuesday.

United Sikhs said, “Singh’s experience is another example of how innocents are the target of hatred.”

New York City police said they’re looking into the incident as a soon as bias attack.

The Sikh Coalition said Monday they are in touch with the NYPD Hate Crimes Taskforce in the case. The group said it provided video footage of the attack to aid in the probe.

“Mr. Singh is shaken and still feeling pain from his injuries, but he is gradually recovering,” Graham F. West, the communications director of The Sikh Coalition, said.

“He is very grateful to everyone who has stepped forward to help him and express solidarity,” he added.

“The investigation is ongoing and no arrests have been made”, police said.

Photos were taken from the incident show that blood is bleeding down from the Sikh’s bread and from the front of the jacket.

“My thoughts are with the man who was attacked & our neighbors in the Sikh community,” Hochul said. “We will find the perpetrator & hold them accountable.” New York Gov. Kathy Hochul tweeted about the incident on Monday.

“Assaulting a member of the Sikh community is despicable, and it’s an attack on all of us as New Yorkers.” New York Attorney General Letitia James also condemned the attack, tweeted.

Giselle Klapper, the Sikh Coalition senior staff attorney, said in a statement to NBC News, “Everyone should feel safe enough to simply go for a walk, but the continued rise in hate crimes and bias incidents is increasingly making that impossible for far too many people.”

“No one deserves to be targeted by hate because of how they look, how they worship, or any other reason,” she added. “We are glad that the NYPD is investigating this incident as a hate crime because approaching these incidents with bias in mind is the first step to reducing violent hate among our communities.”

From 2019 to 2020 such attacks increased to 73 percent, the FBI’s annual hate crime statistics report shows, the most recent year data is available.