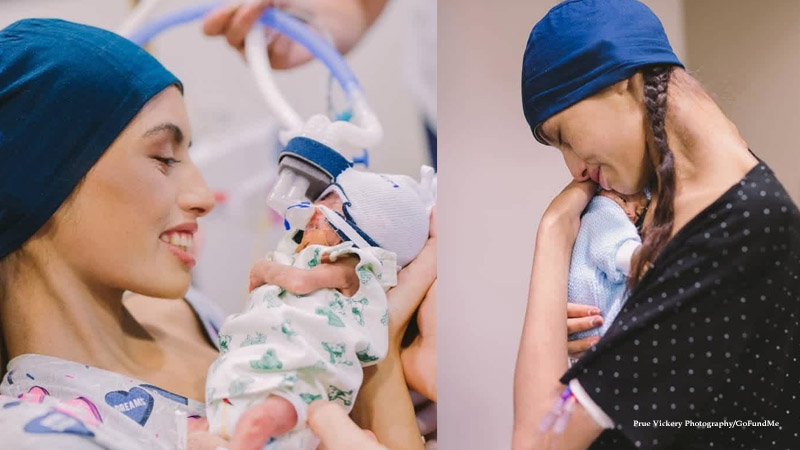 After losing both his love and his newborn son within months of each other, the man who was left behind has come forward to declare his new vow to honor them. On December 29, the man’s “beautiful” bride-to-be died after delaying cancer treatment to give birth to the couple’s son.

Despite her brave decision to delay cancer treatment in order to protect her unborn baby boy, he died a few months before she did. Jackson is now left behind to grieve both his love, Brianna, and their son, Kyden. And, as he tries to put the pieces back together and move on with his life, he has made a vow to “forever love” his beautiful and brave fiancée who has left this world much too early.

Jackson took to social media to express his feelings. Brianna, from Sydney, Australia, was diagnosed with an aggressive and dangerous form of leukemia when she was only seventeen weeks pregnant. It was a rare type that put them at risk in her life.

Doctors gave her a difficult choice despite the fact that she was only eighteen years old at the time of her cancer diagnosis. They advised her to either terminate the pregnancy or fight the rare form of cancer or postpone treatment and carry her unborn child to term.

Jackson vividly recalls her reaction. “Without hesitation,” she made the decision to keep their child alive. Although she had “halved” her own chances of survival by proceeding with the pregnancy, she knew it was the way she was supposed to go.

She tried to stay positive for her unborn baby even as she battled the intense symptoms of cancer. She suffered excruciating pain and high fevers. When she later caught an infection, she was concerned that it would be passed on to her unborn son, Kyden.

The baby boy was described as a “miracle” by family members. He was born three months early via emergency C-section. In the birth photos, we see the brave mother, nicknamed “Queen B,” holding onto Kyden with all her might. In September, she posted on social media.

“Nothing makes me happier than watching my son grow bigger and stronger!” However, after twelve “short but magical” days with Kyden, he passed away after he picked up a stomach infection that his tiny body could not fight.

During an interview with Daily Mail, Brianna said, “Those 12 days I was able to spend with my baby boy Kyden, holding him, counting his toes and fingers and talking to him like I would when he was in my tummy.

They were just so special. They were the best 12 days of my life! Then the most shocking and heartbreaking news was when he picked up a stomach infection, and within hours we were told to say our goodbyes.

The infection took his precious life, and our son grew his wings.” Brianna was devastated by Kyden’s death, but she decided to fight on. Her health, however, took a turn for the worse. She died just a few days after turning nineteen.

Her online obituary states, “You were many things. Forgotten will not be one of them. We will love you forever, Queen B.”

Texas man marries his fiancé as doctors told he has only one day to live
Mum & stepdad left their 5-year-old daughter in the cold bath as “tortuous punishment for misbehavior,” leaving her “just minutes from death”