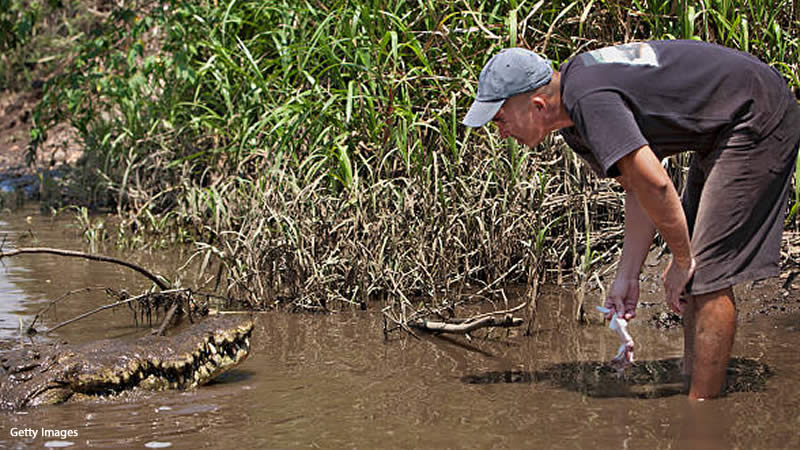 A crocodile killed a man after he fell into a river in the western Indian state of Gujarat. A video captured the moment the reptile dragged the subject into the water.

The man’s remains, identified as Imran Diawan, were found after authorities searched across the river for many hours on Monday.

According to Indian media reports, the 30-year-old man was carried into the water of the Dhadar river on Sunday afternoon in the village of Sokhdaraghu close to the Padra area, which is more than 9 miles from the city of Vadodara.

Here are the images showing the crocodile supposedly dragging the man:

The crocodile is seen swimming away and disappearing in locals’ footage after dragging the man’s remains into the river.

According to reports, the man made an effort to get away from the crocodile.

After being made aware of the attack, forest officials began a search operation with the assistance of the local government, according to Rathod.

Diwan’s remains were recovered around 10 p.m., it added.

As per the independent, the crocodile tore apart his shoulders, the official claimed when the body was found. Authorities are unsure of how the man fell into the river.

“We are trying to find out how the victim ended up in the river, as the locals witnessed the attack only after he was already in the water,” he said.

According to the man’s relatives, Diwan had gone to a shrine near the riverbank.

“I think he must have slipped off the parapet of the dargah [santuario musulmán] and fell into the river. The reptile grabbed and dragged him,” his brother Javed Diwan told the newspaper The Times of India.

However, several locals claimed that the man may have tried to cross the river with dozens of crocodiles, for which he was attacked.

His wife reportedly survives Diwan. Locals assert that the area is vulnerable to deadly reptile attacks, and several incidents have been reported in the area in the past.

Mum finds ‘missing’ son in chimney after he went to find Santa: “His sister tried to follow him”

Hughley asks for Donald Trump to be charged with manslaughter