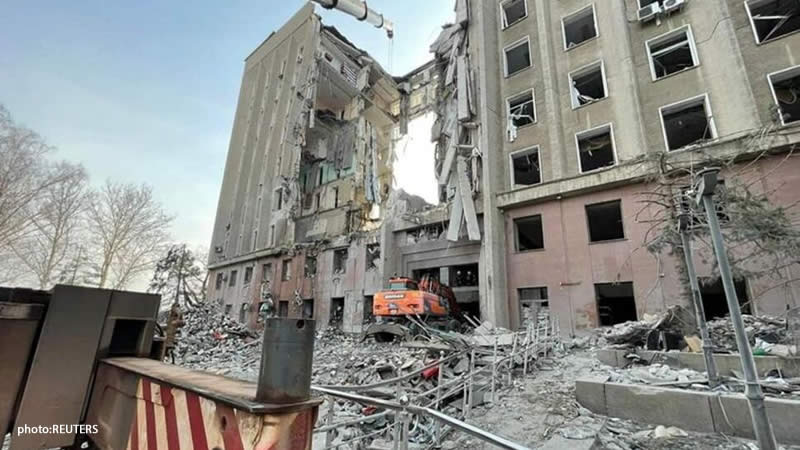 The projectile did strike a five-story building in Voskresenske, Mykolaiv region, severely injuring four children and five adults. According to Vitaliy Kim, head of the Mykolaiv Regional Military Administration, one girl lost an eye due to shrapnel.

The Russian-occupied Crimea, which Moscow forcibly annexed in 2014, has become a growing target of attacks. Sevastopol Governor Mikhail Razvozhayev said on Saturday that a drone flew onto the roof of Russia’s Black Sea Fleet headquarters before being shot down. According to Razvozhayev, no one was injured. Ukraine had not accepted blame for the attack.

According to the British Defense Ministry, there have been few changes in territorial control over the last week, with Russia making small advances in the Donbas. Over the last week, Moscow could not violate Ukrainian defense lines on the outskirts of Bakhmut.

“Russia has not made any major efforts to advance in the Zaporizhzhia or Kharkiv sectors,” the ministry said on Twitter. “In the southwest, neither Ukrainian nor Russian forces have made advances on the Kherson front line. However, increasingly frequent explosions behind Russian lines are probably stressing Russian logistics and air base in the south.”

According to the ministry, the situation is unlikely to change in the coming week because Russia appears to be preparing for limited local assaults with a smaller company of troops.

“However, over the coming months the initiative will go to whichever side manages to generate a credible, committed force for offensive operations,” the ministry said.