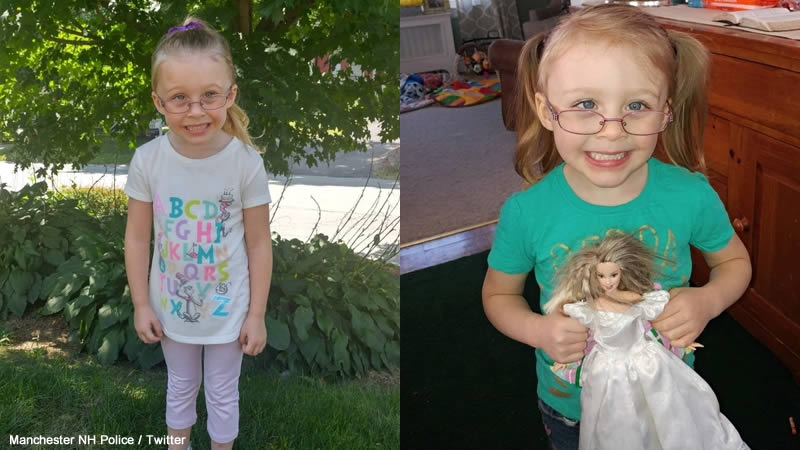 The father of a New Hampshire girl who hasn’t been seen since 2019, but whose absence was only finally found, has been arrested, police said Wednesday.

According to Manchester police, Adam Montgomery, 31, was arrested Tuesday on charges of felony second-degree assault, interference with custody, and two misdemeanor charges of endangering the welfare of a child in connection with the disappearance of his daughter, Harmony Montgomery.

Harmony has not been seen since late 2019, according to the Manchester Police Department, which announced last week that it had just received a report that she was missing.

“The circumstances surrounding this prolonged absence are very concerning and are being thoroughly investigated,” police said.

Harmony’s mother, Crystal Sorey, called the Manchester Police Department on Nov. 18 and said she hadn’t seen her daughter in at least six months, according to an affidavit filed Wednesday in Hillsborough County Superior Court. She later stated that she hadn’t seen Harmony, who was in the physical and legal custody of her ex, Montgomery, since April of this year, when she saw her on a video call.

The New Hampshire Division for Children, Youth, and Families reported to police on December 27 that it, too, had been unable to locate Harmony.

Harmony was last seen by police at a Manchester residence during a “call for service” in late October 2019, according to Manchester Police Chief Allen Aldenberg during a news conference Friday.

Montgomery was found sleeping in a vehicle with his girlfriend by police on Friday, according to the affidavit.

“During our roadside interview with Adam, he made some contradictory statement during our interaction, which raised our suspicion and concern for [Harmony’s] well-being,” the affidavit said.

According to the affidavit, Montgomery told an ex-wife with whom he has other children that he drove Harmony to Massachusetts to be with Sorey, but he told police that Sorey came to Manchester to pick up the child.

When police inquired about Harmony’s whereabouts, Montgomery responded, “not talking to you” and “I have nothing to say,” according to the affidavit.

According to the affidavit, the assault charge he faces stems from an incident in July 2019 in which he allegedly admitted to a concerned uncle that he gave Harmony a black eye after she failed to keep her little brother from crying. Montgomery admitted to the uncle that he had “bashed” the 5-year-old “around this house.”

Aldenberg said Monday during a news conference that the department was “operating under the assumption she’s alive and well and that’s how we’ll operate until someone convinces me otherwise.”

“I’m in rescue mode. We are not in a recovery operation,” Aldenberg said.

The Manchester Police Department revealed late Tuesday that the reward for information leading to Harmony’s capture totaled $33,000, thanks to donations from community members. The FBI got involved in the case as well.
Montgomery was arrested several hours later, according to police. He was supposed to be arraigned on Wednesday, but the hearing was delayed.

Montgomery was appointed a public defender on Wednesday. A message left with the New Hampshire Public Defender’s Office was not returned right away.

Little girl begs her mother to let her shop online so she can sign with her favorite delivery driver: ‘The world needs love like this’
Investigators Reveal a Shocking Twist, After a Teen’s Burger King drive-thru Slaying