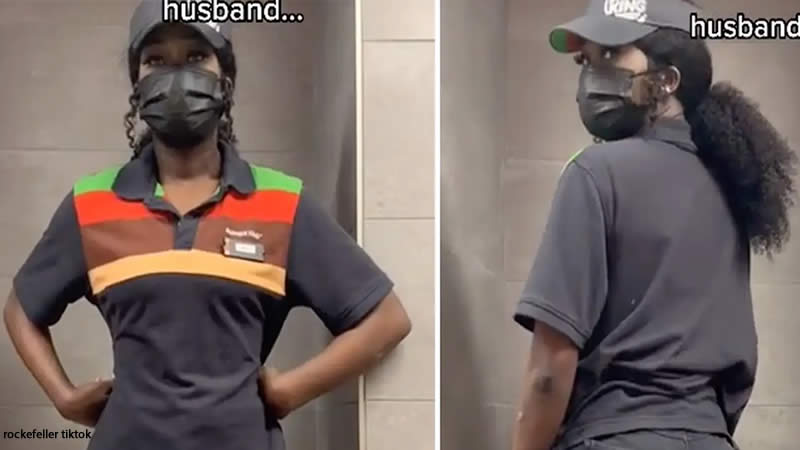 A Burger King employee posted a frustrated TikTok after a customer allegedly told her that her uniform was “too distracting” for the woman’s husband.

This is one of several viral videos addressing whether a woman’s clothing is causing a problem. In early May, a mother accused a security guard of attempting to kick her out of a theme park because of her shorts. Then, in April, a woman claimed on TikTok that a man had pictured her while she was working out at a gym.

In this case, the Burger King employee, known on the app as @rockefeller.o and Lala, explained that she received the complaint while working.

“I had a lady complain today because my work uniform was a ‘distraction’ to her husband,” Lala captioned the clip. “I guess I’ll leave my a** at home next time.”

Lala then flipped off the camera after showing off her uniform in the video, which was a collared Burger King shirt and black jeans.

The video has been watched over 15 million times.

“Distract him from what?!” one commenter asked.

“Apparently she was trying to tell him something and he wasn’t paying attention, so she got upset,” Lala replied.

“She’s mad at the wrong person!” someone else pointed out.

“Our bodies are not a distraction,” a third added.

‘Karens always have the audacity & the nerve,’ she wrote while suggesting the woman throw her husband ‘right in the trash.’

‘Apparently, she was trying to tell him something and he wasn’t paying attention so she got upset,’ Lala replied. ‘Judging by her reaction, I have a feeling that he’s probably cheated on her once or twice.’

‘She’s mad at the wrong person!’ said another, while a third chimed in: ‘She should be mad at her husband, not you.’

‘Tell her to be mad at her husband’s wandering eyes,’ said one more.