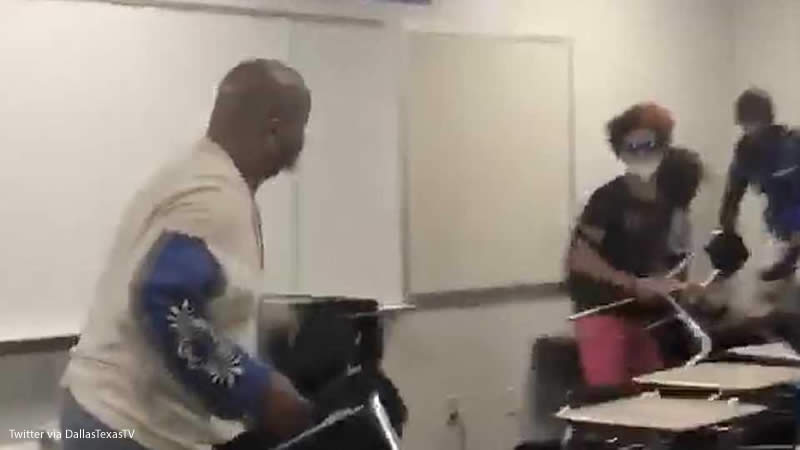 According to frightening footage, a student at a Texas middle school threw chairs at a 73-year-old substitute teacher, who was left with a bloodied face after he threw the chairs back toward the child.

On Wednesday, a substitute teacher at DeSoto West Middle School was struck in the head, according to a video circulating online.

According to camera evidence, another student exclaimed, “Damn!” as instructor Larry Brumfield was slapped in the head.

Brumfield was then seen picking up several chairs and throwing them back at the student who had attacked him, leaving the other students stunned.

Brumfield told The New York Post that the adolescent who tossed the chair was not even assigned to his class and refused to leave.

“Fortunately, I spotted it out of the corner of my eye,” Brumfield recalled of the chair. “It landed on my leg. My leg, as well as my head. It wasn’t as painful, but I could feel blood on my face… I grabbed it and hurled it back at him.”

Several students were yelling or standing on desks while the injured instructor walked around inspecting the damage, according to the video.

In other recordings, Brumfield can be seen throwing chairs at a small boy who had thrown one in an attempt to fight off the enraged instructor.

“Oh my goodness, he’s bleeding!” At one point, one of the girls shouts.

DeSoto police reported last week that they were investigating the situation. The next day, a stronger police presence was on the site to avoid more in-class disruption.

On Friday, classes were canceled, and spring break began a day earlier than expected.

“Students may have observed and recorded an attack that occurred in a classroom on a district site,” DeSoto ISD officials stated in a statement released Wednesday. “The district expressly states that it does not condone or support the incident’s behavior and that all parties will be held accountable to the full extent of the district’s abilities to resolve the situation.”