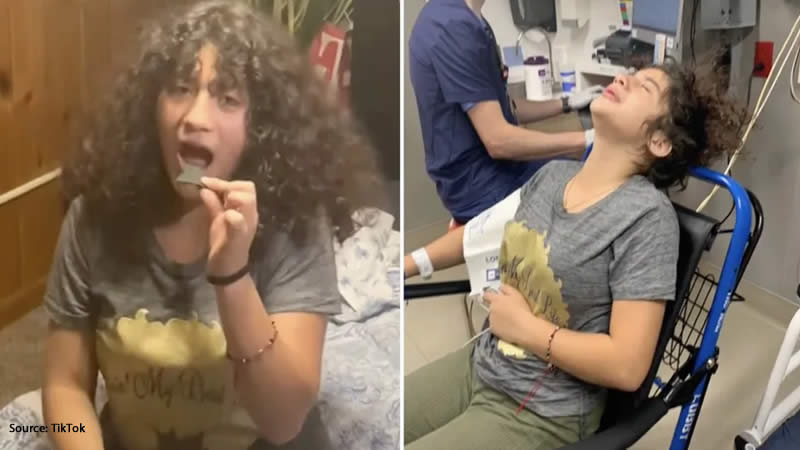 People are being admitted to hospitals for treatment as a result of a new viral food trend.

Paqui, a spicy tortilla chip brand, has gained a large following for its One Chip Challenge.

The product comes in a coffin-shaped box and promises “one extremely hot tortilla chip” made from two of the world’s spiciest chili peppers.

Customers are encouraged to eat the chip whole and then wait as long as possible before eating or drinking “anything for relief” as part of the dare.

On the company’s website, a ranking system titled ‘how long can you last before you short circuit’ deems less than one minute as powerless and more than an hour as invincible.

However, not everyone can survive the heat.

Angela, a TikTok user, took to social media to express her horror at this popular trend.

Her niece can be seen preparing to eat the chip before ending up in the hospital in a video that has since been viewed more than 10.8 million times.

An image shows a young woman dressed in a hospital gown sitting in bed with her head in her hands.

In a later video, the patient explained that she had accepted a $50 bet from her uncle to complete the challenge.

“I was like ‘ok bet’, easy money right, [but] little did I know,” she told followers.

“So I ate the chip right and they stopped recording because it was so bad like I felt like I couldn’t breathe.

From there, it went from bad to worse.

“I was sitting on the bed and my stomach started burning, like really, really bad and I was like, I can’t handle this,” she said.

“I started crying. It was bad.

“So we went to the hospital right and they had to give me multiple medicines but it didn’t really work and then after like three hours it finally worked and here I am.”

‘The worst stomach pain ever

While the young woman laughed it off, her fellow TikTokers were not so sure.

“This is the second video I’ve seen in the last 24 hours where paramedics had to be called because of this,” one person wrote.

“My husband tried this a year ago and ended up in the hospital, and still has stomach issues today,” another said.

“My boyfriend did it,” someone else claimed. “It was the worst thing I ever watched him go through.”

Others begged users not to try it for themselves, warning of painful outcomes.

“I had the worst stomach pain ever, I was in the fetal position,” someone wrote.

Georgia’s mom texted before she was found dead: ‘They won’t let me go
Life after monkeypox: Men describe the road to recovery