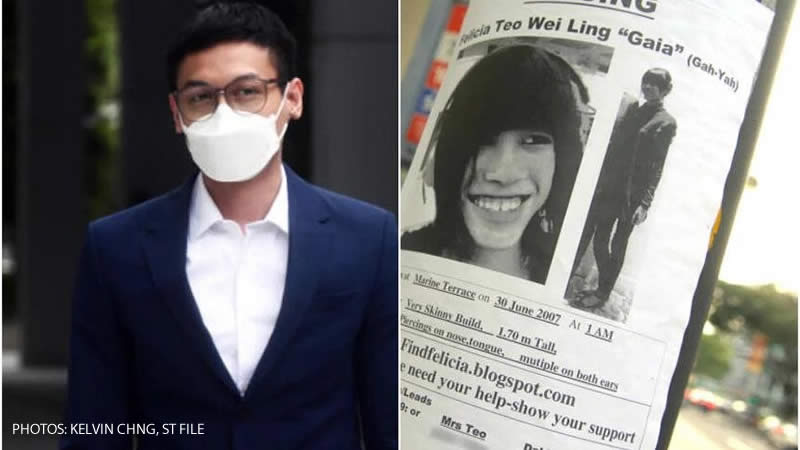 It’s difficult to believe that this case has been ongoing for more than a decade. What started as Felicia Teo’s missing person-murder case is gradually coming to a close, revealing some heartbreaking truths.

On October 14, Ahmad Danial Mohamed Rafa’ee, 37, was sentenced to 26 months in prison after admitting to four charges.

The charges include unlawfully disposing of Teo’s body in a public place, dishonestly misappropriating her belongings, providing authorities with false evidence, and fabricating false evidence.

The third-party in the case, Indonesian Ragil Putra Setia Sukmarahjana, Ahmad’s accomplice, is still at large.

Ahmad was arrested on December 15, 2020, and held in custody for 18 months and 12 days until June 27, when he was released on bail. Offenders who have served two-thirds of their sentence may be released on remission, and he is expected to be released soon.

Teo, a 19-year-old art student, disappeared on June 29, 2007. She was last seen entering the lift of a Marine Terrace housing block with Ahmad and Ragil, who were thought to be her friends, according to surveillance footage.

Four days later, her mother filed a missing person report and joined the island-wide search for Teo, which involved over 200 people, including family members and friends.

At the time, police investigating Teo’s disappearance found no evidence linking Ahmad and Ragil to any improper conduct. Ahmad and Ragil both claimed Teo left the apartment on her own accord around 2 a.m.

In July of this year, the case was transferred to the Criminal Investigation Department after thirteen years. Police then stated that they had found new evidence linking Ahmad to one of Teo’s belongings.

According to the Straits Times, Ahmad, Ragil, and Teo went to Ragil’s house in Marine Terrace after a party at Lasalle, where they had studied, on June 30, 2007. According to Ahmad, the three took ecstasy in the unit, and Teo died sometime before 6 a.m. due to unknown circumstances.

To avoid getting in trouble for drug use, Ahmad and Ragil devised a plan to dispose of Teo’s body. They first placed her body on a mattress, then covered it with another mattress and cleaned the area.

Later that morning, they went to East Coast Park and purposefully left her phone there to give the impression that she had visited the park. In the evening, they went to local hardware stores to get the materials and tools they needed to dispose of Teo’s body.

She was placed in a tape-sealed carton box and brought to the ground floor via the stairs to avoid surveillance cameras in the lift area. They flagged a taxi and drove to Punggol Track 24, where they dug a hole in the ground, placed the box, poured kerosene into it, and set it ablaze. When the fire was out, they closed the hole and left.

Teo had left some items at Ragil’s house, including a laptop that Ahmad had given to his father and her camera, which had been given away or sold.

In court, Deputy Public Prosecutor Yang Ziliang stated that Ahmad and Ragil’s lies had kept Teo’s family in the dark for over 13 years, resulting in a significant waste of public resources.

In the ST report, DPP Yang said, “The lies meant that Felicia’s family never found closure for so many years, and never found out about Felicia’s death until recently.”

Up till today, only her skull has been recovered.

Ex-Teacher Faces Murder Trial After Family of 3 Are Shot to death in California
Researchers develop a new strain of Covid-19 in a laboratory with an 80% kill rate: REPORTS