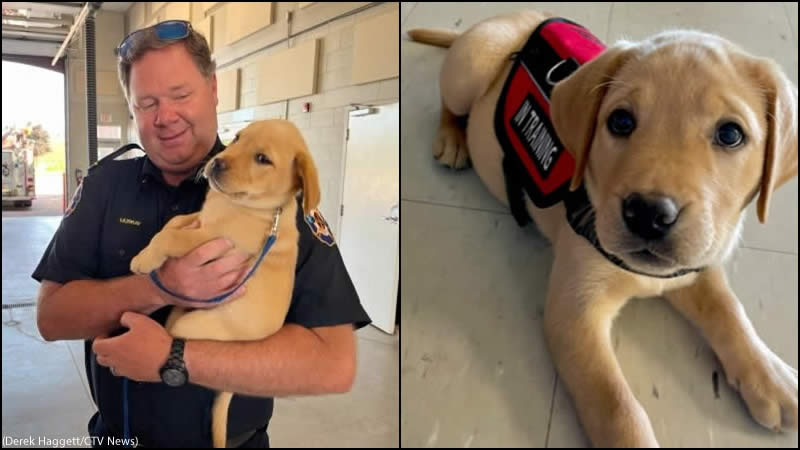 A beloved Labrador puppy belonging to the fire department in New Brunswick has passed away.

The “facility dog” of the Riverview fire station, Murphy, who was eight weeks old, died overnight on Wednesday.

“In the short time he was with us, he touched the heart of many people in our community,” said Fire Chief Robin True in a news release.

Two weeks ago, Murphy started working for the department as a therapy dog for firefighters.

The puppy was a part of Canine Therapy for First Responders Atlantic’s facility dog program.

“Our support for the program is as strong as ever, and when the time is right, we will renew this program in Riverview,” said True.

“The Facility Dog program is a valuable part of the mental health support system for our First Responders, as Murphy taught us.”

The University of Prince Edward Island’s veterinary college will work with Canine Therapy for First Responders Atlantic’s Tracey Ryan and her colleagues to determine the exact reason for Murphy’s demise.

“Our hearts go out to Riverview Fire and Rescue, our handler’s families, and the entire Town as we mourn this special puppy,” said Ryan.

According to the Town of Riverview, providing its workers with mental health care will remain a top priority for now.

The release said during his short life, Murphy made a “significant contribution” to morale across the town by “visiting events and cheerfully introducing himself to residents.”

“His sweet disposition was a comfort to all who had the privilege of meeting him,” it said.

“I had just started to get used to having him come in each day, like the other firefighters. He was already well socialized and seemed to love meeting people and having attention,” said True in the statement. “Seeing him was something I looked forward to in my busy day.”

True said Murphy made a big difference during his “short but impactful time with the crew.”