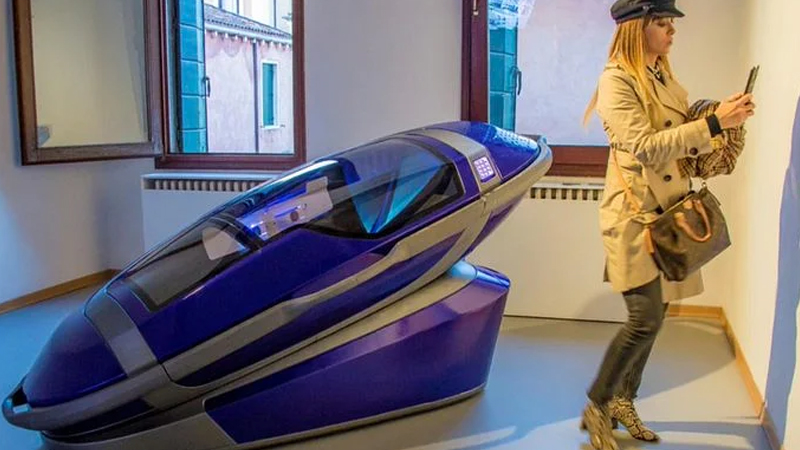 Switzerland has recently legalized a new method of death: assisted suicide. The Sarco Suicide Pod, a 3-D-printed portable coffin-like capsule with windows that can be transported to a tranquil place for a person’s final moments of life, has been approved for use by the country’s medical review board.

Traditionally, chemical substances have been used in assisted suicide methods. Exit International’s Philip Nitschke told SwissInfo.ch that his “death pod” takes a different approach. “We want to remove any kind of psychiatric review from the process and give the individual control over the method,” he explained.“Our aim is to develop an artificial intelligence screening system to establish a person’s mental capacity. Naturally, there is a lot of skepticism, especially on the part of psychiatrists.”

The pod can be activated from the inside and can provide the person intending to die with various options for where they want to be in their final moments. “The machine can be towed anywhere for the death,” he said. “It can be in an idyllic outdoor setting or in the premises of an assisted-suicide organization, for example.”

To be qualified to use the pod, the person who wishes to die must complete an online survey to prove that they are acting on their own will. If they pass, they will be told where the pod is situated and given an access code.

The machine can be operated from inside even by blinking in case the person using it suffers from locked-in syndrome (a condition in which a patient is aware but cannot move or communicate verbally due to complete paralysis of nearly all voluntary muscles in the body except for vertical eye movements and blinking),’ the Independent UK reported

Once inside, the person wishing to end their life must answer pre-recorded questions and press a button to begin the process of flooding the interior with nitrogen, rapidly reducing the oxygen level from 21% to 1%. “The person will get into the capsule and lie down,” he said, adding, “It’s very comfortable.”

He said the person will likely feel disorientated or euphoric. “The whole thing takes about 30 seconds,” he said “Death takes place through hypoxia and hypocapnia, oxygen and carbon dioxide deprivation, respectively. There is no panic, no choking.”

In 2020, approximately 1,300 people died by assisted suicide in Switzerland, almost entirely by ingesting liquid sodium pentobarbital, which induces a deep coma before killing the patient. In addition to the Netherlands, Germany, Belgium, Luxembourg, and Canada, assisted suicide is legal.

The Sarco Suicide Pod is planned to go into service in 2022. According to the company, three prototypes were formed, but one was not “aesthetically pleasing,” so it will not be used. The cost of using the service has not yet been announced by the company.