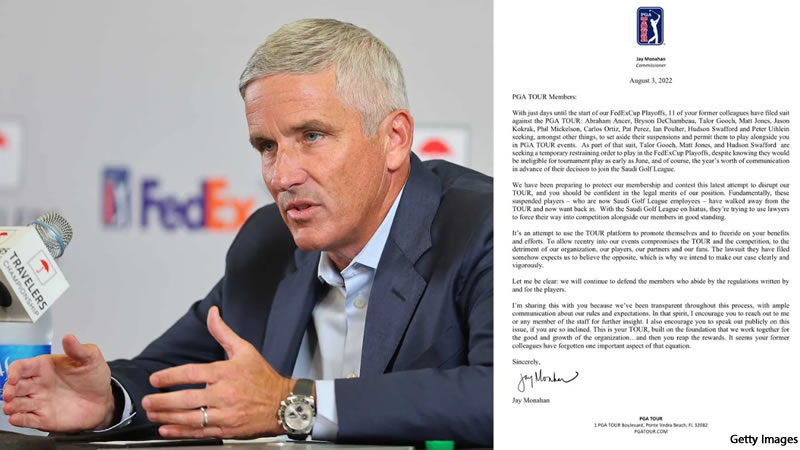 The PGA Tour sent a statement to its players advising them of the complaint and rebutting the arguments made by the 11 suspended PGA Tour players behind it just minutes after LIV golfers’ lawsuit against the PGA Tour became public.

The PGA Tour should not have been permitted to suspend its players for participating in LIV tournaments or for persuading others to join LIV, it was claimed in the antitrust lawsuit.

The complaint makes claims that Mickelson was kicked off the Tour on March 22 and won’t be eligible to return until 2024. (Other players have experienced similar temporal suspensions and would be subject to worse punishments if they kept taking part in LIV events.) Its antitrust claims, according to the Wall Street Journal, which first reported on the lawsuit, might have wider ramifications for the kind of control a sports league has over the acts of its rivals.

As per Golf, if they weren’t suspended, Gooch, Jones, and Swafford—three of those players—would be qualified for the playoffs as they comfortably rank among the top 125 in the FedEx Cup standings. They’re seeking a temporary restraining order to play anyway in an attempt to finish out the season and earn additional FedEx Cup prize money.

Monahan’s memo said this filing came “despite knowing they would be ineligible for tournament play as early as June, and of course, the year’s worth of communication in advance of their decision to join the Saudi Golf League.”

Monahan added that the PGA Tour has been preparing for the lawsuit and that Tour pros “should be confident in the legal merits of our position.”

“Fundamentally, these suspended players — who are now Saudi Golf League employees — have walked away from the Tour and now want back in. With the Saudi Golf League on hiatus, they’re trying to use lawyers to force their way into competition alongside our members in good standing,” the memo read.

Monahan suggested in no uncertain terms that the lawsuit was an effort by LIV golfers to have it both ways and that it represented a move by Tour players to “promote themselves and freeride on your benefits and efforts.”

Tour players were urged to contact the Tour with any more questions and to speak publicly, “if you are so inclined,” he added, adding that the memo was a continuation of the Tour’s transparency throughout the entire process.