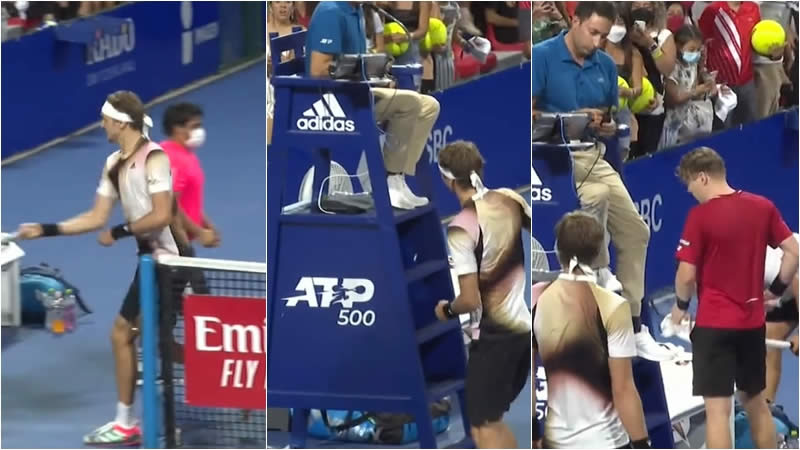 After lashing out at an umpire after losing in doubles, Germany’s Alexander Zverev was kicked out of the Mexican Open in Acapulco for ‘unsportsmanlike conduct.’

After losing 6-2, 4-6, 10-6 against Lloyd Glasspool and Harri Heliövaara, Zverev and Brazilian tennis player Marcelo Melo came perilously close to hitting the umpire when he repeatedly stormed the official’s chair with his racket.
After the four players exchanged handshakes at the net at the conclusion of the match, Zverev returns to his chair, only to make three risky swipes inches near the chair umpire’s legs.

After storming the umpire’s chair, Alexander Zverev was ejected from the Mexican Open.

During the deciding set tiebreak, Zverev’s irritation came over a line call.

The German was enraged, crouching down and saying, ‘look where the ball bounced, 8-6 in the tiebreak, for fk sake. It’s f*ing your line.

When the game ends, the Olympic champion hits the chair three times as the crowd gasped in disbelief before going on to shout: ‘you fing destroyed the whole fing match! The whole f***ing match.’

Zverev was enraged at a missed line call in the deciding set tie-break, referring to the chair umpire as a ‘f***ing idiot’, much to the delight of the Acapulco audience.

Infuriated by the officiating at this point, Zverev smacks the side of the umpire’s chair with his racket once more, before the official, visibly shaken by the incident, rushes from the court.

The ATP announced in a statement that he had been pulled from the event and that fellow German Peter Gojowczyk, whom he was scheduled to play next in singles, had been handed a walkover win.

Zverev will almost certainly face a hefty fine for his actions, as well as the possibility of a suspension following an ATP examination.

‘Unsportsmanlike conduct is defined by the ATP Tour as ‘any misconduct by a player that is clearly abusive or detrimental to the success of a tournament, ATP and/or the sport.’

The ATP continues to investigate the German player after his ex-girlfriend Olga Sharypova made charges of domestic violence, including allegations of violent physical assault. Zverev has categorically denied all of the charges.
The German was kicked out of the Acapulco tournament for ‘unsportsmanlike conduct.’

As per Golfsingleplayer, after committing eight offenses during a match with Karen Khachanov at the Western & Southern Open in Cincinnati in 2019, tennis bad boy Nick Kyrgios was given a suspended 16-week ban from the tour and a record fine of around £90,000, including verbally abusing umpire Fergus Murphy and spitting towards the official.

As a result, he was placed on a six-month probation.

Only a day before this heinous episode, Zverev had made tennis history in Acapulco by breaking a new record for the earliest tennis match end.

Zverev and opponent Jenson Brooksby finished their match at 4.55 a.m., beating the previous record of 4:34 a.m. set by Lleyton Hewitt when he beat Marcos Baghdatis at the 2008 Australian Open.