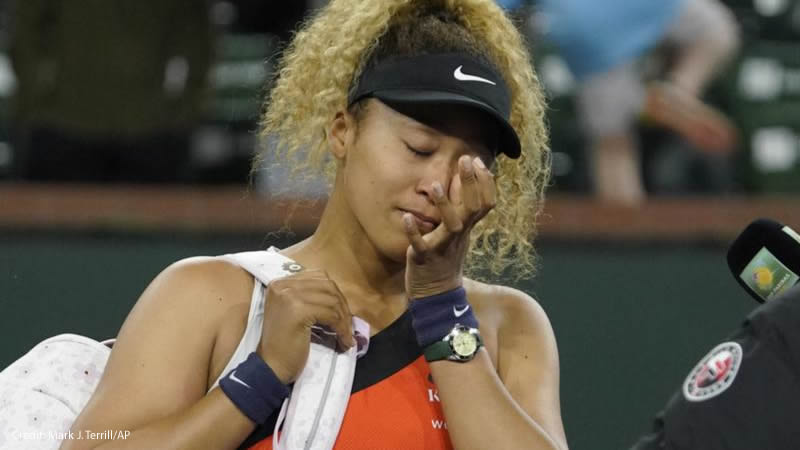 Late Saturday night, a BNP Paribas Open match between Naomi Osaka and Veronika Kudermetova in Indian Wells was disrupted by the words of one heckler.

While not out of place among the trolls that most prominent athletes will undoubtedly face throughout their careers, the words clearly had an effect on Osaka.

The heckler was quickly booed by the rest of the crowd, and the match was briefly halted while the four-time Grand Slam champion asked the chair umpire if the fan could be ejected.

Between games, Osaka was seen in tears. During a break in play, Osaka approached the umpire and asked if she could borrow her microphone to address the crowd. The request was turned down.

Osaka, who has been open about her mental health struggles as a professional tennis player, struggled for the rest of the match.

The 24-year-old Kudermetova, ranked No. 24 by the WTA, hung a donut on the former world No. 1 in the first set and went on to win 6-0, 6-4, extending a run of some of the best tennis of her career. In the round of 32, she will face Marie Bouzkova.

Naomi Osaka explains how heckler reminded her of Venus and Serena

After the match, Osaka was allowed to address the crowd, which is unusual for a loser. She explained that while she had been heckled before, the Indian Wells setting reminded her of Venus and Serena Williams’ experience at the same tournament decades earlier:

“To be honest, I’ve gotten heckled before, it didn’t really bother me. It’s heckled here, I’ve watched a video of Venus and Serena getting heckled here, and if you’ve never watched it, you should watch it. I don’t know why, it went into my head and it got replayed a lot. I’m trying not to cry. I just wanted to say thank you and congratulations.”

The video Osaka mentions is undoubtedly from the Williams sisters’ 2001 controversy. After losing in the quarterfinals to Venus, Russian player Elena Dementieva accused the sisters’ father, Richard, of fixing matches between his daughters. Soon after, Venus withdrew from the tournament just before her semifinal match against Serena, citing tendinitis.

As a result, the Williams family was booed vocally during the final between Serena and Kim Clijsters. Richard later claimed that the family overheard racial slurs from the mostly white crowd.

The incident damaged Indian Wells, widely regarded as the world’s largest non-Grand Slam tennis tournament. According to the Palm Springs Desert Sun, Serena later described it as “the darkest moment of her career.”

The Williams sisters would not play there until Serena joined in 2015, followed by Venus a year later. Even though they eventually resolved, the story appears to have stayed with Osaka, who grew up watching Serena.

Continue Reading
You may also like...
Related Topics:Naomi Osaka