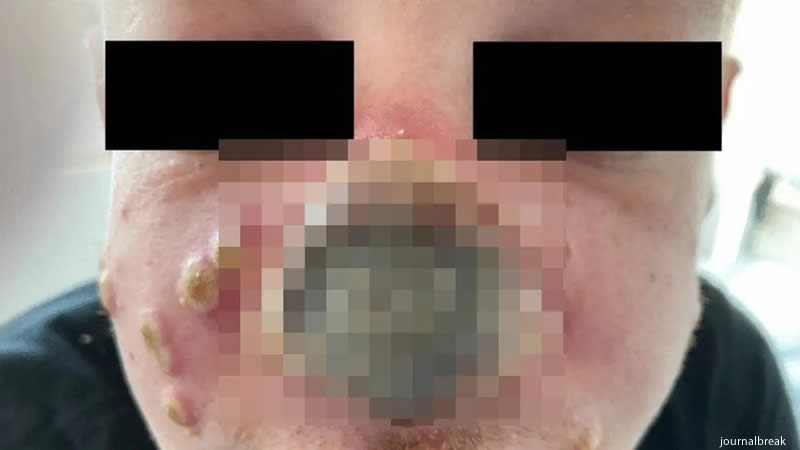 A monkeypox case in which the patient’s nose began to rot has led doctors to warn of the virus’s potentially devastating effects on certain patients.

Doctors in Germany reported the case after a 40-year-old man saw his doctor with a red spot on the tip of his nose that was initially diagnosed as sunburn.

However, the man’s condition worsened over the next few days, with necrosis forming in his nose.

A condition in which body tissue dies is known as necrosis. This can happen for a variety of reasons, including injury, infection, radiation, or chemical exposure. Necrotic tissue symptoms vary based on the type and location but may include severe pain.

A picture of the German patient reveals his nose to be covered in dry, cracked skin that has gone black near the tip.

While the patient’s nose was worsening, doctors observed that he had developed skin lesions all over his body that were consistent with a monkeypox infection, including on his penis and mouth. Doctors performed PCR tests on the skin lesions and found that the man had monkeypox.

Further tests showed that the man had long-term syphilis, a bacterial infection, as well as an advanced HIV infection, both of which had gone unnoticed.

HIV can eventually develop into acquired immunodeficiency syndrome (AIDS), a possibly deadly condition. Although HIV cannot be cured, it can be properly treated.

Doctors stated in their study about the patient who developed necrosis that most cases of monkeypox so far have been moderate and that a controlled HIV infection “does not appear to be a risk factor” for severe cases.

However, they added that this case in particular “illustrates the potential severity of MPXV infection in the setting of severe immunosuppression and untreated HIV infection.”

The patient was given oral doses of tecovirimat, an antiviral medicine authorized for use against smallpox that may also be used to treat monkeypox in patients with severe symptoms. He was also given antiretroviral therapy for his HIV infection, as well as syphilis medicine.

According to the study, the patient’s monkeypox lesions dried out over time and his nose “partially improved” with less swelling. While necrosis cannot be reversed, it can be managed by removing affected tissue.

The report was published in the journal Infection on August 15.

White House: Joe Biden Now Has Cough, But Not COVID-19
Monkeypox infection may be the cause of myocarditis: New Study